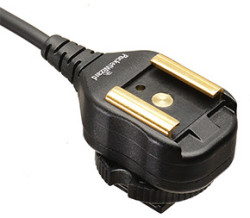 Radio trigger manufacturer PocketWizard has announced an overhaul of its “cable program“, redesigning various connecting cords used with its products.

The revamp includes the introduction of a new hotshoe-to-3.5mm cable, the HSFM3, the first such adapter to be offered by PocketWizard.

“This cable has been long overdue in our line,â€ said company vice-president Dave Schmidt. â€œThere are several flashes on the market that skipped the basic PC port making this cable a necessity and the PC port is not known for its reliability. This high-quality cable will provide the connectivity and reliability photographers expect from PocketWizard.â€

The cable makes it easier to connect PocketWizard’s more basic triggers, such as the Plus III and PlusX, with shoe-mount speedlites lacking sync ports, such as the Canon 430EX II and Nikon SB-700. Until now, there was no way of triggering such mid-priced flashguns with PocketWizard’s more basic triggers, unless you bought a third-party hotshoe adapter.

Priced $36.50 (about Â£24) the HSFM3 flash sync cable is available from authorised PocketWizard dealers including B&H.

Apart from the advanced FlexTT5 TTL triggers, the company has yet to introduce a radio receiver with a built-in hotshoe, as many other brands have done.