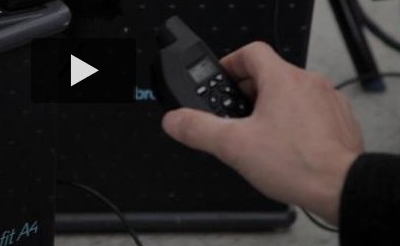 A behind-the-scenes video was briefly published on Vimeo of a product photography shoot for the new PocketWizard Plus III wireless flash triggers. When Lighting RumoursÂ published a link to the video on social media and contacted PocketWizard for comment, the company could neither confirm nor deny the new product, but the the video was subsequently removed. If you visit the link now, you will see a message saying

Sorry,Â “PocketWizard Plus III”Â was deleted at 6:43:09 Thu Jan 5, 2012. We have no more information about it on our mainframe or elsewhere.

Unfortunately we didn’t get any more screen-captures before the video was deleted. In the film, the PocketWizard Plus III is shown triggering Broncolor brand packs. It hasÂ no hotshoe, which implies it is a manual trigger and not part of the ControlTL series. The device looks like a compact version of the MultiMax, but with LCD and controls on the left hand side (as if it were mounted sideways) and no pointy aerial. It has an upright profile vaguely similar to the PocketWizard Plus and Plus II, suggesting it takes two AA batteries. Any new features were not demonstrated, as the focus of the film is the lighting setup for making product images of a PocketWizard Plus III mounted in the hotshoe of a Nikon D3 series camera.

The video was shot by Alain Aguilar and produced by Ruben Rodas of Skyframe Pictures, an independent filmmaker, apparently toÂ show the product lighting setup. It was later independently spotted by theÂ Iso 1200 blog.Â Nothing has been officially posted on the manufacturer’s web site yet.

Thanks to Sergiu Bacioiu for sending us the link to the video.