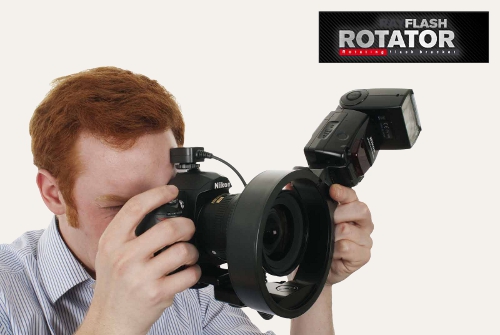 RayFlash – the company behind the eponymous ring flash adapter – have released the RayFlash Rotator, a new 360Â° flash bracket designed for TTL on-camera use.

It allows the flash unit to be positioned anywhere around the lens to avoid harsh side shadows normally associated with an on-camera flash in the vertical position. OR, for very dramatic light effects, use the flash position to create monster shadows!

Several adapters are included in the box for different flash-camera combinations, no screwdrivers or Allen keys required. The bracket weighs 495g and has a diameter of 138mm.

There are two versions of the RayFlash Rotator: one for Canon and one for Nikon. Both carry a recommended retail price of Â£154.80 including VAT and are already on sale.