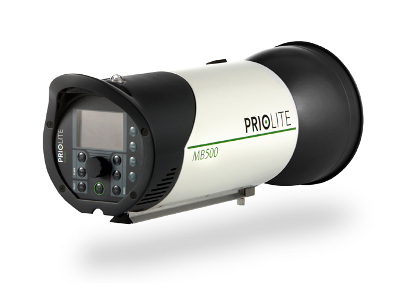 This September, Priolite will be announcing a new portable flash system. The “Prio Pack 1000â€, to be exhibited at the Photokina trade fair, will be a battery generator with a lightweight flash head. This is in addition to the MB1000 monolight with internal battery that is also going to be unveiled at the show.

The German manufacturer, based in WÃ¼rzburg, stated that a mobile battery pack has been missing from their line-up and “we want to offer everything”. So far, the Priolite range comprises only the MB500 and M500 self-contained flash heads. The MB500 is unique as it has a radio receiver and lithium battery built in to the head, allowing truly cable-free operation.

According to the firm, customers need not regret having bought Priolite monolights, because “you cannot really compare [monolights] to a generator solution”. So the Pack will probably be marketed to a different audience.

Pure speculation on our part produces the following feature set for the Prio Pack:

As a newcomer, Priolite’s Prio Pack 1000 will be going up against the Profoto Pro-B3, the Hensel Porty and Bowens Explorer. It’ll need to compete on cost and performance to steal some market share from the established brands.

The company say it will have an “attractive price”, but don’t expect something super cheap – the Priolite MB500 monolight already starts at â‚¬1,094!Â It’s also worth pointing out that, at the time of writing, Priolite products are only distributed in Germany, Austria, the Netherlands, Switzerland and Turkey.

To learn more about Priolite, visit their web site.