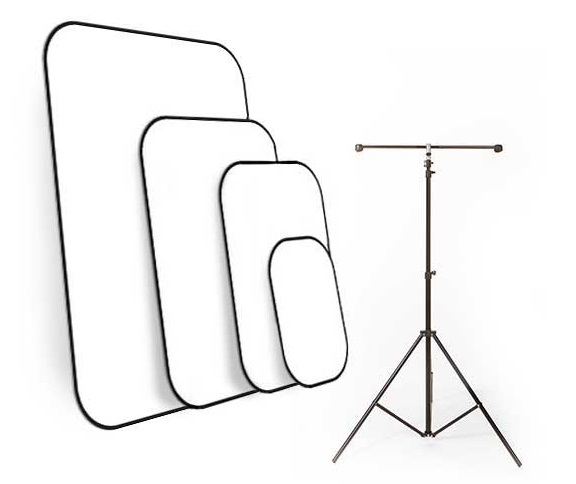 Got a collapsible background? Lastolite has invented a device that takes the stress out of setting it up. The Magnetic Background Support (MBS) is bracket that will let you quickly and easily hang a pop-up backdrop from a single light stand, so you don’t have to resort to clamps or leaning it on things.

The patent-pending design comprises a bent bar with a strong magnet on either end, and a point in the middle to fix the apparatus to the top of your light stand. The axis between the magnets is offset from the stand itself, so the backdrop can hang freely. But because there are two attachment points rather than one, you don’t have to worry too much about the panel swinging about or sitting crookedly.

Obviously Lastolite would rather have you buy one of their own collapsible backdrops, but the Magnetic Background Support work with most other brands (and “no-brands”) as well. I’ve been using it with a cheap eBay backdrop and had no problems so far. But if yours has a rim made of a non-ferrous metal like aluminium then you’ll be out of luck â€” that’s physics for you.

Now you need only face one frustration with your pop-up backdrop â€” how to fold the damn thing.

The Magnetic Background Support will be available as part of a kit including a stand and carrying case, or on its own. A price has not been announced yet. Visit Lastolite’s product page for more information. Review coming soon.