As you might have already read, Profoto is announcing a new portable strobe tomorrow. We previously speculated on the features in this flash. We now have the full product specifications ahead of the launch. (Thanks to our anonymous source!)

The new device will be called the Profoto B10 250 AirTTL. It will have 250Ws of energy, weighing 1.3 kilograms and featuring a removable battery pack, which has the capacity for over 400 full-power flashes, according to the specs. What makes the Profoto B10 different from the B1(x) and B2 units is that it can be charged during use. This makes it the first strobe from Profoto that can operate on both mains and battery power. 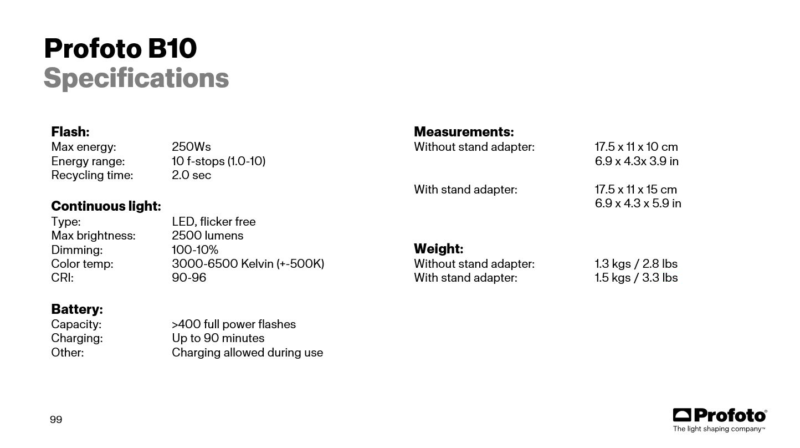 As well as flash functionality, the B10 is one of the first heads whose modelling lamp is powerful enough to be used as a video light. The maximum brightness of the LED is 2500 lumens, with adjustable colour temperature between 3000 and 6500 Kelvin.

Earlier we reported that Profoto has received certification for a new Bluetooth chipset, and we can now also confirm that the new product will indeed have Bluetooth. The Bluetooth functionality is used for smartphone connectivity, in order to allow users to change strobe settings (such as power and mode) and to upload new firmware.

Since the strobe is called the B10 and not the B2x, as many of you have suspected, we can also reasonably conclude that that the new product will not replace the B2. Although specs might be similar, the B2 services still a different kind of purpose. The dual head and pack configuration allows it to be used in a different way.

No definitive word on pricing yet. Full information will be published on the Profoto web site tomorrow.

Update: the Profoto B10 has been officially announced.