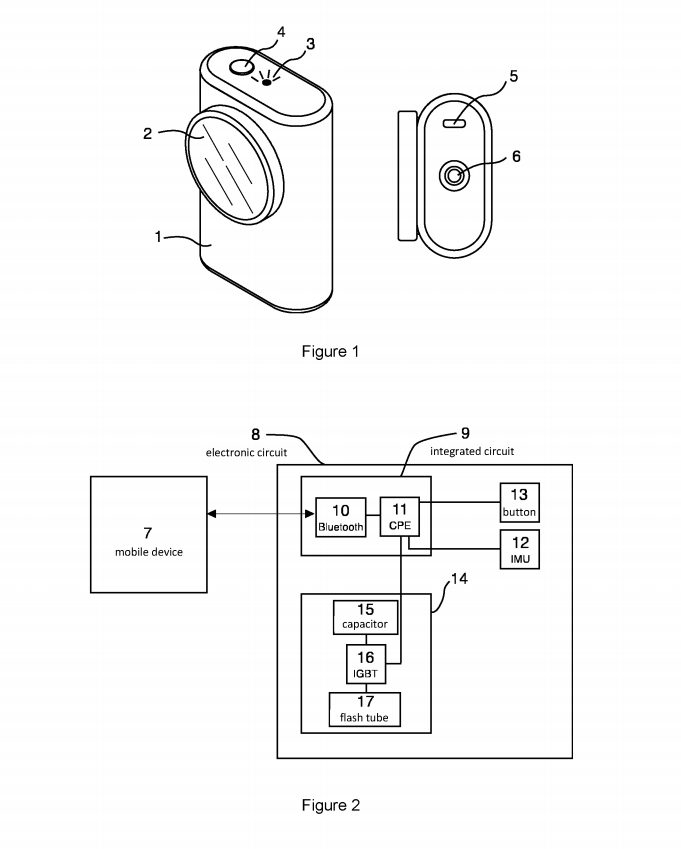 Profoto’s document directly cites the Godox A1 and Ozzalite Case as earlier examples of xenon smartphone flashes. The Godox A1 was recently discontinued and the Ozzalite (also known as CaptureCase) seems never to have reached the market.

Initially, the mobile device calibrates itself by calculating “the delay between the start of image capturing on the mobile device and the moment of triggering the flash of the external unit” by inspecting the timestamps of signals sent from the flash unit to the mobile device at regular intervals. Using this information, the software knows exactly when to signal the flash to fire at the right time during an exposure.

In some situations, the entire sensor may not be exposed at onceâ€”above the maximum synchronisation shutter speed of the camera. To mitigate this, the light source can simulate an ‘apparently uniform’ flash throughout the whole exposure period by using ‘a large number of short and quick bursts during the time that the mechanical shutter travels over the sensor’ â€” i.e. high-speed sync (HSS; also known as FP-sync). The flash duration in ordinary single-pop mode is less than 1 millisecond (1/1000 second); in ‘apparently uniform flash’ (i.e. HSS) mode it is at least 25 milliseconds (1/40 second), using pulses that modulate at frequencies ‘typically’ above 15 kHz.

(By contrast, the Innovatronix CPFlash 550W works by firing an LED flash first and then tripping the camera shutter.)

As a bonus feature, a button on the flash can send a signal to the mobile device telling it to take a photograph. This is handy if the camera(phone) is on a tripod while the photographer is holding or adjusting the light.

Another interesting mention in the patent is ‘an inertial measurement unit’ to determine the orientation of the flash, so it knows if the unit is pointing at the ceiling (for the purpose of bouncing the light to diffuse it). In that event, the output is automatically increased to compensate for the diffusion of the beam. However there is no mention of this in the Profoto A10 instruction manual so it may be incorporated in a future model.

Automatically adjusting the output implies that off-camera auto-exposure flash for smartphones is on the way. In manual mode, you wouldn’t want your lights second-guessing your decisions by increasing output above the level you have set. But in Auto/TTL mode, it’s a desirable feature. Right now, only the Profoto C1 and C1 Plus LED lights offer automatic through-the-lens (TTL) flash exposure in the Profoto Camera app. It uses one or more pre-flashes for the camera and light to determine the correct settings for a properly exposed subject. Xenon AirX flashes, namely the A10, B10 and B10 Plus, support manual control only when used with phone cameras.

Smartphone TTL flash is hinted at on the Profoto Camera FAQ page: ‘auto mode is planned to come [to xenon flashes] some time in the future’ but no timeline is given. Profoto Camera is supported by the Huawei Mate 30 and P40 series, recent Google Pixel and Samsung Galaxy S-series handsets and iPhones running iOS 11 or later.

Update: another patent, published by Profoto in March, describes automatic exposure in more detail. The proposed procedure involves first taking an ambient-only exposure, then an ambient-plus-preflash shot, and comparing these measurements to determine the appropriate combination of camera settings or flash intensity, which is set automatically for the resulting exposure. This is much more explicitly automatic flash for smartphones.

Of course, patents do not always turn into retail products, so we shall have to wait and see.