When I first started in photography, I thought umbrellas were the coolest light modifiers: cheap, portable and useful. That was before I ever used one.

I was surprised how cheaply made the average umbrella was made. My thought was: This is such a great tool. If youâ€™re going to make something like this, why do it so cheaply?

I guess itâ€™s a way a company can make their introduction into the business: make an umbrella. But there are so many cheaply-made umbrellas, how do you stand out in the crowd? There are companies that make better-quality umbrellas. I would consider Photoflex and Westcott to be a couple of these companies.

Maybe because Profoto has the reputation for making seriously professional gear and the price to along with it, that I never bothered to check if they made umbrellas. Softboxes? Check. Strobes. Check. Umbrellas? Really?

I found out about their umbrellas when I received an eMail touting their new Umbrella Deep line. I couldn’t help but to get excited. Not only would I hope that the umbrellas would be quality, but they have a deeper concave shape to them. What does this mean to me? The ability to give shapes more definition due to the more focused beam of light from the umbrella. Lastly, these umbrellas already start out fairly large at 4â€™3â€ feet and extra-large (5â€™5â€).

So I eMailed Profoto and asked for some evaluation units. I tell you, not only does Profoto make professional quality gear, but also dealing with them is also professional. I canâ€™t tell you how many companies where a dozen eMails and phone calls fly back and forth before anything gets done. I think one phone call and two eMails. Done. Perfect. Easy.

The umbrellas arrive with their own canvas carrying case with the Profoto logo emblazoned on them. Nice case and you could probably squeeze another umbrella in there in a pinch. When I opened the smaller of the two sizes, I was taken by surprise how big they were. I knew they were large, but it still took me by surprise. I immediately thought the large-sized would be great for 3/4- or full-length shots. I was going to use them for a couple of photoshoots I had in the coming week.

I first tried the umbrella in a low-key photoshoot that was on location, outdoors. Then I remembered one of the reasons why I almost exclusively use softboxes: weight. If you didnâ€™t know, San Francisco is windy. It may be only second to Chicago. It didn’t take long when I had the stand and umbrella standing until a fairly little breeze took the umbrella down with the stand. I only saw the shock on the modelâ€™s face to know what was happening! I have a feeling that the deep concave shape of the umbrella adds to the sail-effect. â€œWhy not weigh down the stand?â€ Well that negates a couple of the major benefits of an umbrella: weight and portability. Then I need to carry sandbags, plop them onto the stand. More stuff to carry and deal with. And I’m all about simplicity.

But the incident did test the durability a bit. Not a scratch or bend in the umbrella. Nothing. I thought I saw the umbrella bounce a bit. The ribs of the umbrella are of fiberglass and quite flexible. The outer fabric didn’t show any scratches or damage either. The shaft was totally fine. Three points for Profoto. For now, the umbrella will have to wait for my indoor shoot the following week. I pulled out my usual go-to octodome softbox that I almost always use on my shoots. The weight of it is just enough that I donâ€™t have to worry about it.

The indoor photoshoot was going to take place in an Edwardian-styled Bed and Breakfast in San Francisco called the Chateau Tivoli. I brought along some speedlites and a Paul C. Buff X800 Lightning monolight. Iâ€™d rather use speedlites for simplicityâ€™s sake. While I think they provide enough power for an indoor shoot, you just canâ€™t get the light to spread out enough in the umbrella to make them effective. I probably could’ve attached a Gary Fong Lightsphere to my speedlite to give it that more â€˜bulbâ€™ quality. But I thought that was just silly. So I attached the PCB unit. Seriously, even at 300W, itâ€™s many many times more powerful than youâ€™ll need for an indoor shoot. I was shooting at 1/32 power and it was plenty. Not sure if Profoto applies any special chemicals or materials to the interior of the umbrella. But the light output is highly effective. Seriously, you can probably use a bare-bulb speedlite to use this umbrella indoors with moderate ambient light. Would love to test this theory out someday.

You can purchase diffusers for the umbrellas. In addition to softening the light output, they use a stop of light. Which comes in very handy in my opinion. I see these umbrellas largely as high fashion modifiers. But apply the diffuser and using them for more portrait-oriented work.

I mostly used the large version of the modifier for my shoot. While my model is 6â€™2â€ with heels, I would use the umbrella to capture her on a sofa. The large-sized umbrella I thought was perfect for its light and mobility. The extra-large version would be perfect when sheâ€™s standing.

Because this umbrella is so large, using a boom and C-stand is the best way to use it. Indoors, itâ€™s stable enough on a heavy-duty light stand. In this configuration, positioning is limited. But since I was shooting with it pointing down or straight, it worked fine with a beefy light stand. But be prepared to use a C-stand and boom for more elaborate umbrella positioning. 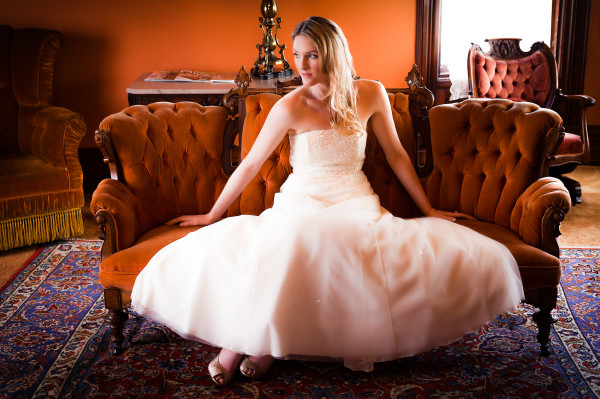 Â­Â­Â­The shoot went extremely well. There was some adjustment to use the new equipment. I rarely use modifiers that are that big so it took a bit of fiddling. But once I got it working, it was fantastic!

Would I buy one? Yes! The big hurdle for these umbrellas is cost. No doubt about it. But that’s if someone thinks of these as â€˜umbrellasâ€™ and not softboxes. Because of their deep, concave shape and especially when you add the diffuser. They turn into softboxes. Their pricing brings them to the beginning of the softbox category. But I donâ€™t think Iâ€™ll see these on Craigslist.org anytime soon. Which is my main domain for my shopping. So it might be a bit of a wait for me!