US-based manufacturer Quantum Instruments have announced a new wireless controller for their FreeXWire radio triggering system. Like the Quantum Pilot and Trio, the CoPilot is capable of controlling three independent groups of remote Qflashes in manual, automatic or TTL modes. There is a QF91C for Canon E-TTL and a QF91N for Nikon i-TTL. 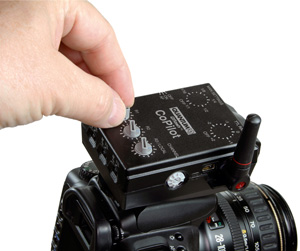 The CoPilot prioritises user-friendliness by eschewing complex LCD menus for old-school analogue dials.Â The result is a compact transmitter that slides into your camera hotshoe. By twiddling each of its three knobs you can intuitively adjust the power level (or exposure compensation) of your off-camera flashes. At the flick of a switch you can quickly swap between M and TTL modes. The interface is similar in some respects to the PocketWizard AC3 ZoneController. 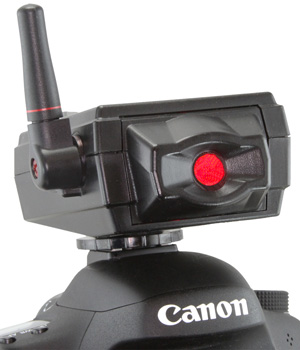 Canon users will be pleased to hear that the Quantum CoPilot has an LED autofocus-assist lamp, sending out an infrared beam to help autofocussing in low-light situations. Nikon DSLRs already have built-in AF-assist illuminators, but the CoPilot’s will be used preferentially. Other wireless TTL triggers, such as the Phottix Odin, don’t have anything to help you focus in the dark.

The CoPilot is primarily for commanding Quantum’s radio-enabled Qflash units such as the Trio and T5dR. However, you can incorporate older Qflashes and non-Quantum speedlights into your setup using FreeXWireÂ FW8R or FW10W radio receivers.

Though there is no hotshoe on top of the transmitter, you can connect a “local” Qflash (presumably mounted on a bracket, or handheld) via cable with TTL pass-through. This connects to a socket in the side of the CoPilot transmitter. There’s also a Mini-USB socket for future firmware updates. Unfortunately the CoPilot’s control panel isn’t made up of LEDs or backlit, so it might be a challenge reading your settings in the dark. Other potential annoyances include CR123A batteries and a plastic (vs. metal) hotshoe foot. 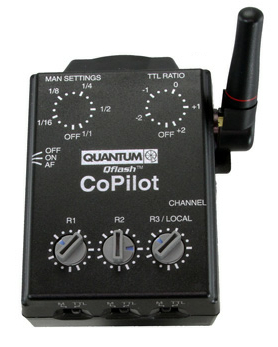 The simple design of the CoPilot contrasts with the intricate menu systems of their more feature-heavy products. The relative ease-of-use and lower price (US$216 RRP) suggests Quantum might want to appeal more to new users as well as supporting their existing customer base.

The Quantum system is not a budget option, but rather an investment. In addition to the $216 CoPilot you’ll need a compatible light. If you want a Qflash, which is more powerful than a speedlight and has advantages of being bare-bulb, the cheapest is the T5d-R at $706. This must be powered by an external Turbo battery pack, starting around $500.

Whether Quantum are worth your money depends on your own needs as a photographer. If you don’t like the idea of connecting your flashes to battery packs or radio receivers via cables, then you may prefer the Canon ST-E3-RT and 600EX-RT. Nikon doesn’t have its own radio triggering solution yet.

The Quantum CoPilot will start shipping to dealers next week. For UK resellers, deliveries will start “in early July” for Â£149 plus VAT. For further information, visit the manufacturersÂ official product pageÂ or watch their demonstration video.