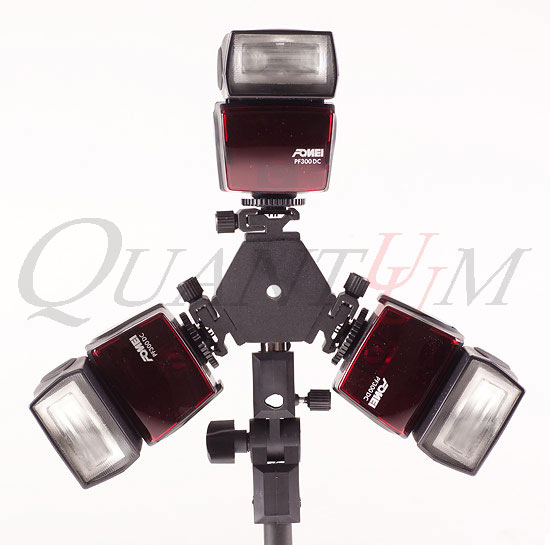 The Quantuum BK-6 is a solid metal triple flash bracket that cost Â£24.99 from Foto-Tip. The flashes are arranged in an even Y configuration (as opposed to the perpendicular shape of the more expensive Lastolite TriFlash

) and are fixed in place with clamping cold shoes. There is an 8mm umbrella hole through the centre. The bracket attaches by a 1/4″ screw socket on its base to a cheap plastic umbrella swivel.

Using a triple flash bracket is a nifty way of creating a brighter light source without resorting to studio flashes and without having to set your speedlights up on a forest of multiple light stands. Apparently, in some countries the Sun comes out in the middle of the day on a regular basis(!) and this sort of setup is useful for overpowering it. Meanwhile in the North of England I used it to light up a big oak tree on Christmas Eve instead:

The bracket itself is a just heavy block of metal with some clamps welded to it, and therefore almost indestructible. The clamps are metal too and feel similarly sturdy. Ideally, I’d like them to be removable so I could screw my radio triggers directly to the bracket for extra security.

It’s a shame that the included umbrella swivel is of such apparent low quality compared to the triple flash bracket itself. I would replace it with a better one at the earliest opportunity. Foto-Tip/Quantuum don’t include a tightening bolt for the umbrella hole in the centre of the bracket, but other sellers do. Instead the product pictures suggest you should mount your umbrella off-centre on the plastic swivel underneath, which seems silly.

Overall this is a good bracket for the money, but if you plan to use umbrellas don’t buy it from Foto-Tip. Instead, try somewhere like JS Camera Store, where it still costs Â£24.99 and includes the centre tightening bolt.