RadioPopper has officially released their latest flash trigger, the Nano, which they claim to be “an extremely reliable basic radio trigger with the most powerful radio on the market”. The product is designed with performance, rather than features, in mind, with a specified 500-metre range but no support for advanced operations such as TTL, high-speed sync or wireless flash grouping. 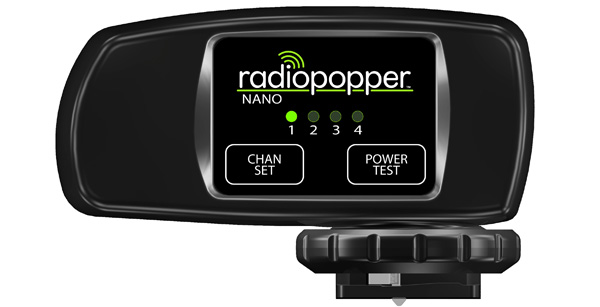 The Nano offers four frequency channels (on the 916MHz band), a battery level indicator and touch-sensitive buttons. In an earlier preview we were told it has a “bulletproof” design. It is the first RadioPopper to possess a hotshoe for clip-on system flashguns, but also has a 3.5mm sync port for connecting to studio lights.

RadioPopper’s Rachael Jackson said: “It is incredibly easy to use with a very low price tag.”

The manufacturer’s web site lists the RadioPopper Nano as “$69.95” each. However this is slightly misleading since the pricing is per unit, not per kit, and you’ll need to buy at least one transmitter and one receiver â€” $139.90 â€” before you have a working set. That makes it cheaper than the PocketWizard PlusX but more expensive than many other, more advanced competitors.

You can buy the Nano from Adorama, B&H and other authorised dealersÂ in the USA.Â Update: RadioPopper has given us a “conservative” estimate that the EU Nano will be “available for purchase within 4 weeks max”.

Watch the company’s product demonstration video below for an overview of the device.