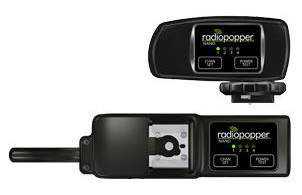 The RadioPopper Nano, first unveiled in April, will be a manual-only radio remote, sitting below the JrX Studio in the manufacturerâ€™s product lineup, which offers the added benefit of manual power control.

In the video â€” by Kevin Focht of The Creative Orange, a photography education site â€” a spokesman from RadioPopper introduces the gadget, which will cost â€œwell under $100 [USD] for a unitâ€. It is the first trigger from the US-based manufacturer with a hotshoe on the receiver, making it possible to connect a speedlight without cables or adapters. There is also a 3.5mm sync port for studio lights or to connect multiple flashes at the same time.

The Nano will have an obscenely long 500-metre operating range, several times that of generic rivals â€” which usually offer 100 metres or less â€” and on par with PocketWizards. The motivation behind this is supposedly to have â€œthe best rangeâ€ and â€œthe highest reliabilityâ€ with â€œthe most powerful radio on the marketâ€.

â€œIf youâ€™re in a situation where 90% of your range is killed by the environment, that 100-foot [cheaper brand] trigger is now going to be down to like 10-15 feet,â€ says Matt from RadioPopper. â€œWe want to make sure in any situation you get the shot.â€

The device itself is said to be â€œbulletproofâ€, with capacitive buttons rather than mechanical ones to reduce the risk of failure. But it isnâ€™t mentioned whether you will be able to use these buttons in the rain or with gloves on â€” a common bugbear of capacitive screens on smartphones.

The Nano will switch itself off automatically after a period of inactivity, though we arenâ€™t told how long this will be or whether the feature can be disabled. The channel LEDs will double up as battery level indicators and each of the four channels is compatible with those on the JrX series.

Whether the â€œwell under $100â€ figure means â€œper receiverâ€ or â€œper kitâ€ is not made clear. On the company web site the more advanced JrX system is promoted as being priced â€œfrom $89â€, which isnâ€™t strictly true since a transmitter and receiver together cost just under $170.

According to the video, which was published on 30th May, the RadioPopper Nano will be released â€œreally soonâ€ but the company were not prepared to publish a date yet. There will be a 916MHz version for the North American market and, hopefully, an 866MHz CE model after that. VisitÂ radiopopper.comÂ for further information.