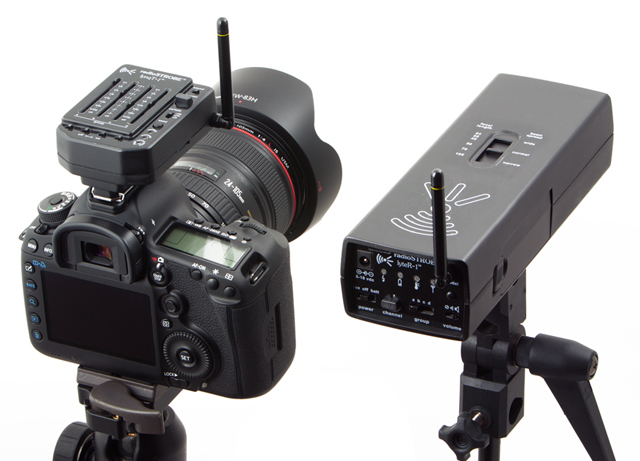 Sometimes it is very good to ask yourself why? For instance, why are manual power speedlites that are clearly meant to be used off camera still looking like their TTL counterparts? This was one of the thoughts USA-based photographer Raman Evazians had when he started the project of creating the radioSTROBE, which (until four days ago) was onÂ Kickstarter seeking funding.Â The thought behind the radioSTROBE is that it is meant to be the ultimate off-camera speedlite.

The radioSTROBE set is basically a combination of a TTL speedlite, 8 AA battery pack and a HSS/TTL trigger combined into one single unit. Besides the shape the guts of the radioSTROBE has also been beefed up compared to a more tradional speedlite. It has a larger Xenon flash tube to have better heat resistance, and a larger capacitor makes the flash more powerful. Furthermore it can run off a 12V DC adapter or old-fashioned 12V lead acid batteries. The trigger is able to control four different groups using the sliders on top of it.

Specifications on the Kickstarter are (were â€” see below) presented in such a way that that they seem rather impressive, but it is all about the presentation. Personally I don’t want to use eight AA batteries in series since the weakest battery in the series would determine the failure point. Also the modeling light is a burst of low power flashes, similar to what Nikon flashes already have. I would not say that this can be called a modeling light. The guide number of the radioSTROBE shows that bigger capacitors do not translate into higher GNÂ compared to other popular flashes. The way how the information was presented on the Kickstarter makes it look like it is something bigger than it actually is.

The radioSTROBE lyte-T1 and lyte-R1 set were priced at $650 for ‘super early birds’. At this price it is (was) directly trying to compete with flashes such as the Canon 600EX-RT or the Nikon SB-910, which is rather ambitious for a Kickstarter project. At the time of writing the above,Â only 2% of the $280,000 had been raised. As of this week the creators have cancelled the crowdfunding campaign, with just $5,407 of $280,000 raised. No explanation wasÂ given on their web site.

What do you think of this concept? Let us know in theÂ comments below.