Anybody looking to take their speedlights off the camera, but wanting to maintain wireless E-TTL or manual control, should have a look at the new Dazzne Kody TTL system. The gadget â€” by the newly-minted Rikon photographic equipment group â€” is one of the first lighting accessories under the Dazzne brand. Another TTL trigger? What could this one have to offer?

Thanks to its appearance, with a rear-facing LCD screen, we expect the Kody often to draw out comparisons with the Phottix Odin, which is one of the top pieces of bit available on the market to any photographer seeking to get their most out of their speedlights. As well as apparently offering most of the key features of the Odin, the Kody throws in extras such as a TTL pass-through hotshoe, a slightly lower profile and the fact that the camera-top unit is a “transceiver”, so you can use it as a receiver too if you have more than one of them.

Nikon users will no doubt be delighted to learn that the Kody TTL does not discriminate on the basis of camera brand; that is, a Nikon DSLR will get all the same great benefits as their Canon-toting buddies will reap from such a device.Â In practice, this means you will be able to use your off-camera Speedlights to i-TTL mode and adjust their exposure compensation, or remotely switch them into manual mode and select any power level.

All this is done over 2.4GHz radio signal, so no need to worry about operating in bright sunlight, over longer ranges or not in direct line-of-sight, any of which can easily confound Nikon and Canon’s own infrared-based wireless transmission systems. While Canon has its own radio solution now, it is very expensive and only works with one particular model of speedlight, whereas the Kody can work with a range of different E-TTL flashguns and even trigger manual studio lights too. Firmware updates via USB port keep these radio triggers future-proofed. 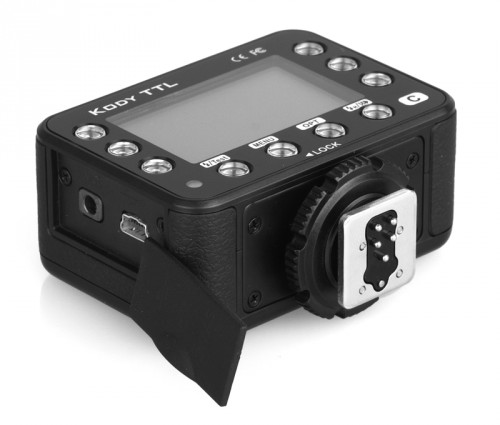 And the Kody system has even more to offer, in that their upcoming Kody Flash Light (pictured below) will â€” if all goes to plan in the engineering office â€” have Kody functionality built in such that all its features may be remotely controlled without even having to attach a radio receiver to the bottom of it first. Yes, that’s right: Canon is going to be given a run for its money with a direct rival to their EX-RT Speedlite control system.

Not much has been confirmed about the Dazzne Flash Light yet, as it is still in development. But what weÂ doÂ know is that it will have master/commander mode for infrared wireless systems, in addition to any radio receiver capabilities Rikon may or may not bestow upon it. This would make it, apart from the as-yet-unreleased Phottix Mitros, one of the first Chinese flashguns able to act as a wireless master.

It will also have high speed sync (something that only the Yongnuo YN-568EX has in China so far), an external power input socket, PC sync port, electronic zoom head (24-105mm), sound prompts (which may be switched on or off) and power saving mode (which may also be switched off). Even if the engineers can’t find a way to fit the radio functionality in to the Flash Light, it will still be compatible with the Kody system like other flashguns simply by putting it on top of a receiver.

Here at Lighting Rumours, our connections aren’t just wireless ones, so we were able to get our hands on a couple of sample kits from Rikon. These are full production units, not prototypes, so everything you see is what will be in the final product (though firmware may be updated at any time in the future).

The packaging for the Dazzne Kody kit is very nicely polished, so you need not fear this being something churned out of a dodgy workshop somewhere. The triggers come in a custom padded case, along with all the cables you could need, lanyards, hotshoe covers and an adapter to fit the receiver into coldshoe mounts. 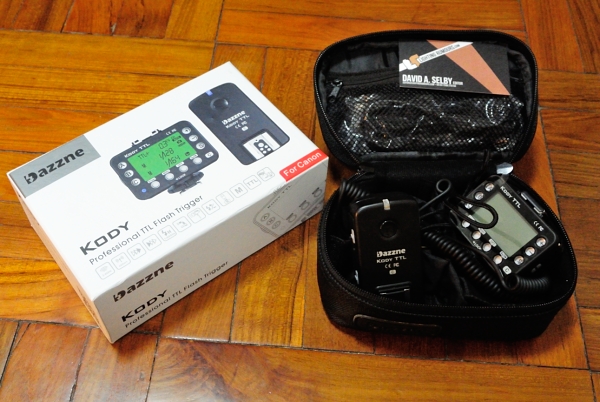 The units themselves feel rock solid in the hand. Squeeze them tight and they don’t creak like some other electronics might. Put in a pair of AA batteries and switch on the Kody TTL transmitter to be greeted by a bright green backlit control interface. Being a man, I didn’t bother to read the instruction manual before having a play, but was able to figure out most (though not all) of the controls myself in a minute or two.

After a few seconds, the back-light switches off so that it isn’t blinding you all the time should you be shooting in a dim environment. But if you press the buttons to change any settings then it illuminates again to let you see what you are doing. You will notice from the picture below that the buttons themselves are also slightly backlit.

Using the menu buttons you can switch between the independent adjustment mode (shown above) to one of two ratio modes, A:B and A:BC. You can also use the “transmitter” as a receiver unit, by switching it to “Slave” mode in the control panel (shown below). There is a hotshoe connection on top for speedlights (which also works as a TTL pass-through in transmitter mode) and a 3.5mm sync port on the side for connection to studio lights. 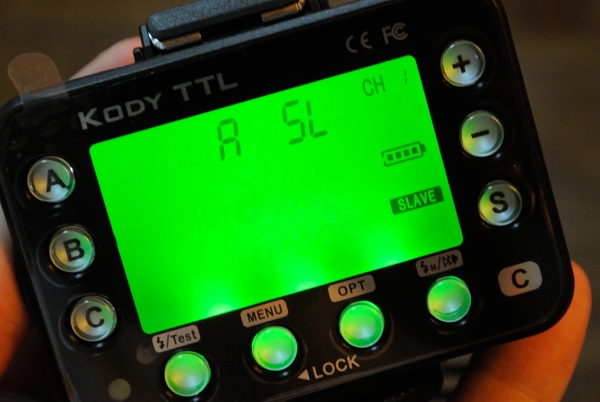 A full review of the Kody TTL system will be published as soon as our tame Canon Speedlite user has been able to put it through its paces. So far it looks very promising, but as ever, operational stability is key and that has not been tested yet.

We were not able to get our hands on either a sample or a prototype of the Dazzne Flash Light and the Rikon catalogue does not offer any additional confirmation of the final specifications. So it is possible that any of its features could change in the near future and there are no clues as to when it will be ready for release. However, we were explicitly promised that the guide number (GN) for the Flash Light will beÂ at leastÂ 58, if not higher. 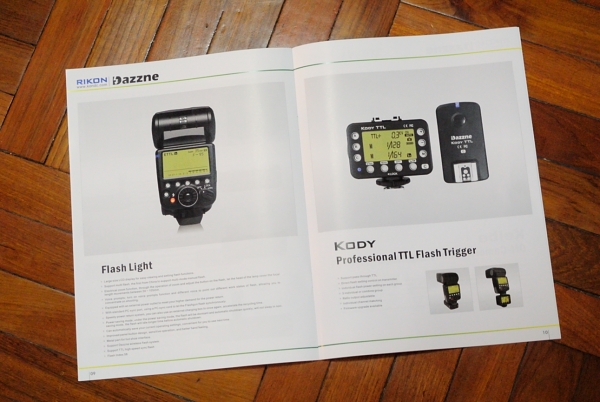 The hardware for the Nikon Kody is complete, Rikon tell us, but the engineers are still ironing out the software bugs, so it isn’t ready to be shipped to dealers just yet. As soon as we hear more about a firm date, we will let you know.Â Those flash photographers toting Sony Alpha cameras (anybody?) might be less impressed though because we haven’t heard any suggestions so far of a Kody for Sony.

Pricing and release dates of the Dazzne Kody TTL system and Dazzne Flash Light have yet to be announced. But the Canon version of the Kody is in production and should be on shelves soon.Â Update: The Rikon Kody is now in stockÂ at a Dutch retailerÂ for â‚¬199 a kit.

Which looks best? The Phottix Odin, PocketWizard FlexTT5, Dazzne Kody or an incident light meter and hired lighting assistant? Let us know what you think in the comments.