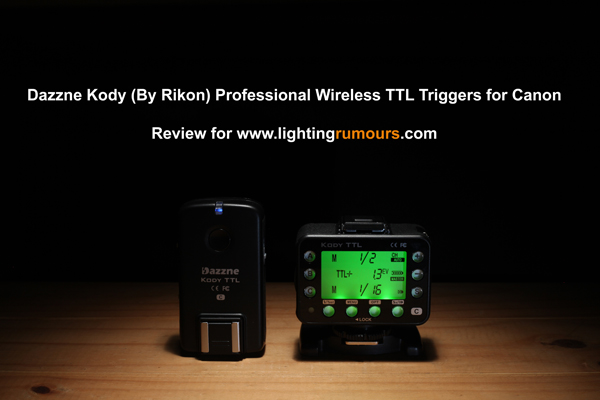 In this review we will be taking a look at the Dazzne Kody Wireless TTL Triggers for Canon from Rikon.

A little about myself. Â My name is Rick and Iâ€™m a portrait photographer & co-host of www.newtophoto.com based in Stockport, UK. Â I would like to thank David Selby of Lighting Rumours and Rikon for sending me the Kody units for review.

Now I shoot manual flash; Iâ€™m no fan of TTL but it is part of my toolkit so I got to know it via my Canon EOS 60D and 430EX II Speedlites. Â Having not robbed a bank for a Canon 580EX II or 600EX-RT I don’t have a way to master control speedlites with full features enabled…until now.

The Kody triggers system is amazing and just works. Â We have come along way with third-party trigger systems and even lights. Â Yo big guys! I hope you are listening and watching as we customers have cheaper fully featured options these days.

Upon opening the packaging and finding two full kits I was pleasantly surprise at how well packaged they were: boxes the right size (I hate over-packing) and a great soft protection/carry case for each set… these little bags are brilliant and I am wondering if they sell them separately. 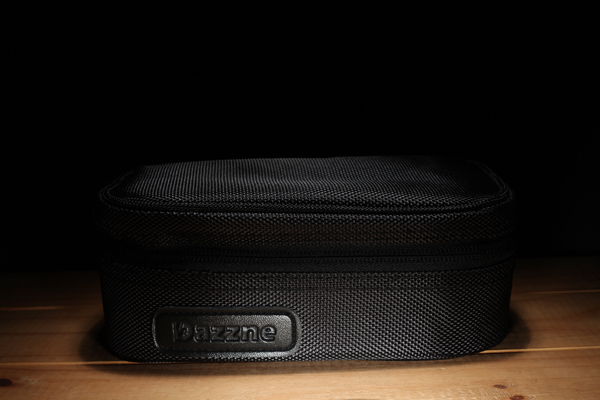 Inside the back we get a receiver and a transceiver unit, PC sync cables with adapters, camera cords, lanyards, hot shoe covers, bracket, foot for receiver and a nice touch a silica pack. You can see a more detailed look at the kit in the first video in the review.

My initial impressions on the Kody units are very good. They seem solid units with little to no play in the housing, battery doors seem solid enough and they are powered by AA.. eff yes. Wish my current triggers were AA instead of AAA as it would offer some redundancy in the bag regarding Speedlite and Trigger power.

One thing I noticed first was the size of the transceiver/controller unit. Itâ€™s pretty big, I would say similar size to the Phottix Odin. I suppose it needs to be for the display to be usable â€” speaking of which: its very clear but I wish the backlight would stay on a little bit longer. Why do I mention the size of the controller/transceiver unit? Well,take a look at the image below of the unit mounted on my main DSLR, a 5D2. (Just want to throw this out also: I’m looking for a second 5D2 for the kit. used, low mileage, good condition, local, good price).

See, it’s large, now imagine shooting portraits vertically as a right-eyed shooter… yup, it’s right in my way; whilst I don’t always shoot with both eyes open I sometimes will as it helps me to spot things that can be missed looking through a DSLR viewfinder. Now I could live with it but it does kind of bug me after being used to lower profile Strato II triggers.

The lanyards are nice but would come off the controller unit straight away so they don’t get in the way.

The units are solid, buttons take a good press to work which is a good thing! No changing setting with your head or hat. The power buttons are grey (which is great) and recessed so no chance of accidental switching in the bag… that’s one thing that bugs the crap out of me with the Strato II triggers.

On camera fitting is easy and secure with a good old thumb screw; wish my 430 EX IIâ€™s had that instead of the crap lever. That said the flash sits securely on the receiver. One thing you will get with cheap crap triggers is weak hot shoes: the metal flexes the light gets lose, won’t fire or worse takes a 13ft dive… not that I have ever had that happen to a Â£200 light myself.

Ohhh you can change power from camera

I have been a manual flash, manual walk over open softbox change power photographer for years and often thought the price for the convenience of being able to do it from camera was silly and I don’t need it… err… maybe I’m getting older but I quite like it.

The buttons need a good press but the units are easy to operate.

You have full group control from the unit and auto channel selection as well as manual channel selection if you’re in an area with a lot of other shooters working. Its easy to switch modes on each group from manual to TTL. You can mix and match TTL and manual flash also.

We have high speed sync… yup no problemo all the way to 1/8000th sec but as ever with HSS at the expense of a shit load of flash power. First curtain works a treat as does Second curtain sync.

You can change from manual to TTL in a matter of seconds, zoom the flash head, change channels. Make the transceiver a master or slave. Now a bit more on that: I would not fancy flying a controller/transceiver unit high on a light stand with a light attached… why? If it comes down in the wind (and let’s face it: in the UK it will happen) that’s a controller unit down. Not saying it will break apart â€” they are solid â€” but the LCD screen is the weak point so if that takes a hit and cracks, you have a dead unit.

What about changing power… yup can do that, handy when dealing with tight lighting patterns like grids and save having to walk over to and open up that softbox to change power.. but we only have full stops in manual mode! Let me say that again.. we only have full stops in manual mode. My 430EX IIs last time I checked had 1/3rd stops, now I can walk on over to the flash and dial in 1/3rd stop and work that way but it kind of defeats the purpose. What about ETTL… we’re good we have full and 1/3rd stops so I have no idea what the issue is. Rikon, you need to update the firmware to give 1/3rd stops otherwise you are messing up a damn good trigger system.

But you can change third stops with aperture or iso, yeah you can but it can change your ambient and take you right on past you sync speed. â€œWell just use HSSâ€, I hear you cry. OK, true but that won’t always work given HSS’s flash power-hungry nature… add a light modifier and you are in world of hurt without multiple lights to regain power and that’s expensive. I know you can work around it with the other exposure variables in some cases, just not all… sometimes you don’t want to make a global exposure change.

I use 1/3rd stops on my speedlites all the time â€” Iâ€™m used to having them. More to the point, the lights will do it so new triggers designed in 2012â€“13 should. Now, I know the Phottix Odins originally had this issue, which was fixed later with firmware… but they should have had this out of the gate. OK, rant over.

I wish I had a 580EX and EX II and a 600EX-RT to play with on these triggers but I can only bring my experience with the lights I own.

One other thing to note regarding the transceiver/control unit is that it will take control and your camera menus â€” whilst they can be accessed and changed â€” won’t work: the Kody takes over, which is expected.

OK: I shot a few images from 25m to 200m+ away. Frankly, I don’t need to show them all: the main reason is I don’t own really long glass. In fact I had to use a borrowed 24â€“105, which sucks on my 60D (it would need calibration). So this image was shot about 200m away; the Kody specs claim 400m of range and I believe them. It’s enough! Let’s be realistic here, how many of you shoot at more than 10m range let alone 200m or 400m with flash? Range is fine. Nothing to worry about.

It does not look that far away in this image, due to compression. Trust me: range is fine.

Easy, no problems. Well laid out and it’s just a case of getting used to button sequences and presses for certain operations.

I took the liberty and recorded a video comparing the Dazzne Kody triggers to the Yongnuo YN-622C in terms of speed of operation, using the transceiver/controller versus using the camera menus on the 622s. I kind of ramble on a bit… sorry, bad habit I have picked up. I think I mention the 1/3rd stop issue again as well. 🙂

OK, this is a bit naff. The height of the controller/transceiver will cause issues, will change the light pattern in some cases and it does affect the speedlite’s AF-assist beam. Saying that, it still works better than the POS one built in to the YN-622s: that AF beam sucks. For me it’s not that much of an issue as I rarely put a light on camera, plus I have my Phottix Strato IIs on hand also.

Solid, (almost) fully-featured TTL triggers that will compete with the Phottix Odins and Canon’s own silly expensive solution â€” the latter requires a 5D3 or 1Dx to be fully featured… yeah right, OK Canon.

I have never understood why people waste a perfectly good Â£400+ light on camera as a master… unless you want on-axis ring light fill, that thing should be on a stand.

I would like to know if they sell the receivers separately as I will not be putting the controller/transceiver up a 10ft light stand. Plus they are too high to mount a speedlite to on a stand, and the light will sit high in an umbrella.. If you cable your lights you will be OK though.

Will I switch to the Kodys?

At the moment no for one simple reason 1/3rd stops on my lights. If a firmware update fixes this and I can get a couple of receiver units separate I will make the jump as the Kody system works and works well. It should still be on your list but for now as a 99% manual shooter I will stick to my Phottix Strato II triggers.

I will come back with an update if a firmware fix is released and I pick these up as a new trigger system.

Thanks for reading and thanks again to David and Rikon.