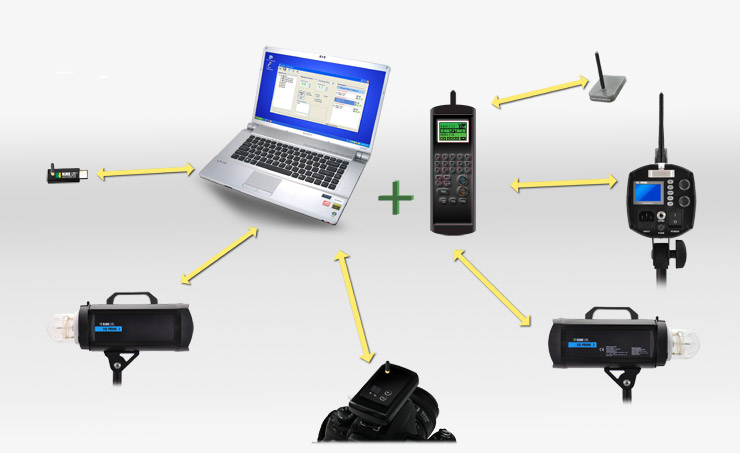 CThree, a Malaysian photography community, have submitted their thoughts on Rime Lite’s XB Prime series – a line of high-end studio flashes with a sophisticated remote control system. Thanks to Franz and the people of CThree for this review.

You can find out more about the features and specifications of the XB Prime system on Rime Lite’s product page.

The Prime system has really good recycling time – The website states that at full power, it takes 1.2secs for a Prime 12 (1,200 Ws) for the AC to fully recharge its capacitor. In fact, the new system provided by Rime Lite (after May 2010) did a better job – Which is almost 1.0s under 1,200 Ws.

Also, we used a light meter to measure the accuracy of the power in a studio environment. We at cThree carry 3 different Primes – 500, 700 & 1,200. All of them gives us extremely accurate light power every time we use it – whether they are reduced 2 f/stops, increased to full blast or more.

Our visit at the plantÂ  in Korea revealed that each piece of their flash lights will go through a slight adjustment for repective country to ensure peak performance & accuracy before shipping out worldwide. The quality control team team there really do a great job as none of the unit we sold for the 1st year (ranging from the entry level, FAME to the high end model, XB Prime ) return with any issue.Â  Most users upgrade from China’s mass market studio strobes immediately notice the superiority of the Hyundae Photonics products range both on the color consistency and durability.

Regarding of the wireless trigger and ZigBee system, it works on almost all cameras â€“Â except for Sony (adapter needed for the hotshoe). The new trigger has memory functions where you can keep all the settings youâ€™ve made in your studio to their A, B, C, D & E channels, that allows you to control 50 strobes at a time and easily control them up to a range of 100m.

Some has said that the Prime system creates a bit of greenish finish to their pictures and white noise during their shot, which is true, indeed. Although we suspect this is due to their camera equipments and DSLR itself, weâ€™ve found that putting Rime Liteâ€™s softboxes can solve this problem. UV-A and UV-R is blocked from the softbox itself, so the UV filter that is screwed to a camera lens will have double its effectiveness.

For the modeling lamp, the Prime is considered very powerful I. It’s class. The 650W modeling lamp power output definitely useful for photographer who might use it occasionally for their shoot. However, we prefer their energy saving model, HMI, that produces a whiter (about 4,200K) and brighter light with 150W.

The flash tube is manufactured by Perkin Elmer from Germany that built to their specs. Its improve on the color spectrum and longer life span approx 100k flashes (full power) which is about 3.3 times longer that most flash tube for mass market flash, but because of the power differences in every shot, weâ€™ve used one strobe for a total of 100k++ times, and is still working perfectly. Good quality I must say.

The RiME LITE flash tube is customized to hold different monoblock powers as you can see â€“ and the levels are: below 800w and above. For every Prime strobe that has 790 Ws and below, a different flash tube is used to accommodate the current produced to create flash light. Prime 300, 500 & 700 has their respective flash tubes (which gives a slightly different white light and maintenance support, maintenance means amount of times you can flash in its overall lifespan) while the 1000 and 1,200 gives stronger withstanding of heat. Thatâ€™s why for pros, we always recommend 1,200 Ws, as the flash tube is completely different and they can have more power, less maintenance & better quality of repeated shots.

Controls and ease of use

For PC syncing, it works like any other strobe out there that has. It works well and so far, there arenâ€™t any problems with that.

The ACS (Aperture Control System) is slightly a bit technical for new users â€“Â And weâ€™ve always advised to follow simple steps like 11-7 = F/11 with 7 steps above regular exposure level, which could mean +3.0.

For the Digital Encoder (blue screen you see) on the Prime, it’s slightly a little clearer than the old version (before May 2010).

If Prime users has a little more cash, they can purchase color adjustment or frosted Pyrex dome which controls colour temperature and gives softer tones when pairing it with Beauty Dish.

The AC Cooling fan is really, really good â€“ very quiet and the monoblock will still be cold under room temperature even during our workshop with 6 photographers firing non stop for 3 hours there and then.

A boom system is great design by them which its design is registered at Korea. The price is slightly more expensive but definitely a good investment for a studio setup. It’s makes the control and adjustment a lot more easier (if users do not have the Remote Control System). So far, weâ€™ve only sold 1 set of XB Prime Boom 700 Ws system.Â  And here, itâ€™s priced at RM2,900 about 25% more pricier than the standard 700 Ws XB Prime.

Malaysian readers can buy the XB Prime 5, 7 and 12 directly from CThree. The lights are also available on eBay and in the following countries: