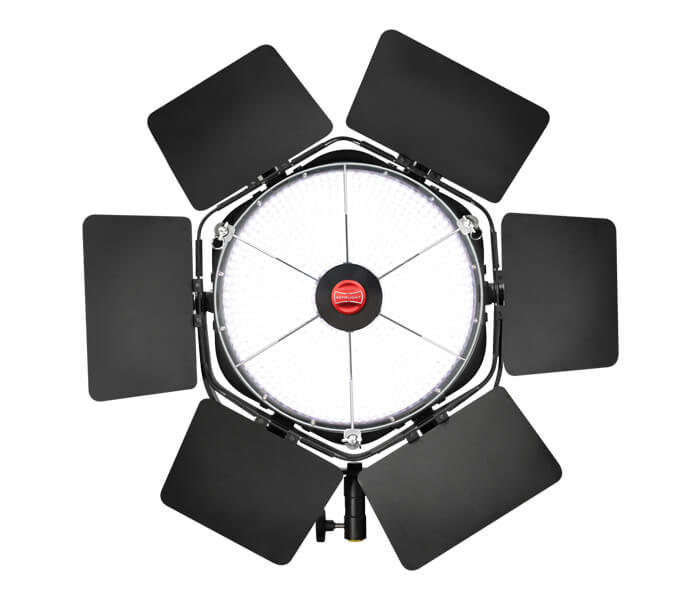 Rotolight, the British LED lighting manufacturer, has announced the Anova Pro 2, a ‘revolutionary’ LED lamp that can be used as a continuous light or as a high-speed flash. The product was announced today via a live stream.

The Anova Pro 2 is over 70% brighter than the older Anova Pro, while only drawing 72 watts of power. Television lighting consistency index (TLCI) is rated at 91, which shouldn’t need correcting in post production. It is aimed at “the most demanding professionals”.

It supports DMX control as well as an RJ45 (Ethernet) connector. The lamp is bi-colour, so colour temperature is adjustable, with Kelvin temperature displayed on the rear LCD of the panel. “SFX” functions also let you simulate firelight and lightning effects.

This isn’t just a continuous lamp â€” there is a built-in Elinchrom Skyport HSS receiver that lets you flash the Anova Pro 2 at 250% output, in synchronisation with a stills camera, at up to 1/8000 second shutter speed. Using an Elinchrom transmitter you can adjust settings wirelessly.

A sync port on the back of the light lets you attach other brands of radio receivers (e.g. Godox X1, PocketWizard Flex, Yongnuo YN622), also allowing fast synchronisation if the camera and trigger combination supports it.

The Anova Pro 2 adds to this but is larger and more powerful than either the Neo 2 or the Aeos. However it can still run on DC power, via V-lock batteries.

Its predecessor, the Rotolight Anova Pro, also had a flash mode that supported high-speed sync, but only at 150% output, and there was no radio trigger built in.

The price for a single Anova Pro 2 is Â£1,249.99 excluding VAT, available to pre-order now and set to ship in January 2017. Barndoors are not included, but the yoke mount, AC adapter, V-lock plate and 6-piece gel filter kit come in the kit. For more information, visit the Rotolight web site.

Are you a stills photographer? Would you replace your conventional studio flash with a flashing LED? Share your thoughts in the comments below.