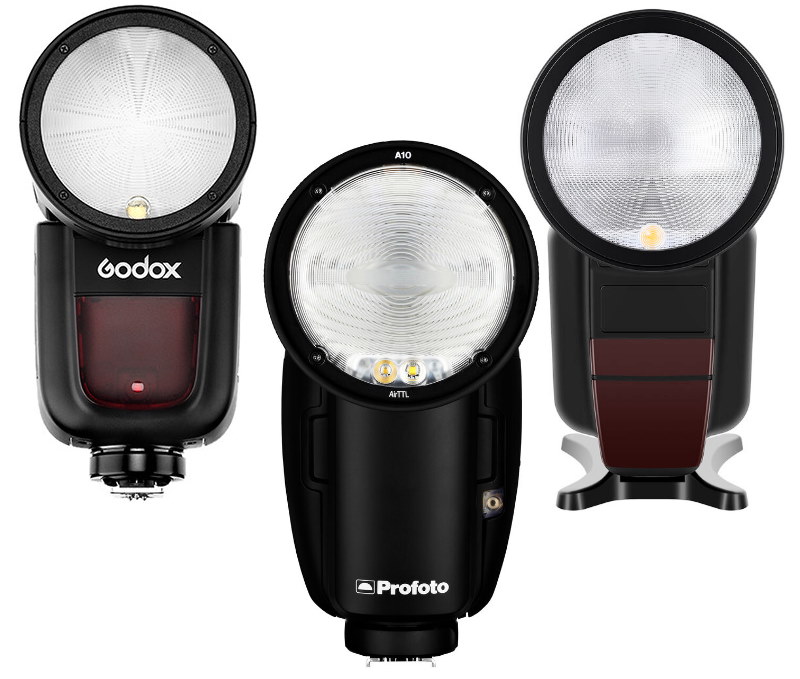 What are the advantages of a flash with a round head?

Most shoe-mount flashes (also known as speedlights or speedlites) were originally designed for use mounted on the camera. The rectangular fresnel, often with a zoom capability, is to designed to illuminate the frame of your photo (which is, of course rectangular) evenly at different lens focal lengths. However, nowadays many photographers like to use their flashes off-camera, where the rectangular-shaped beam can look slightly strange or have unnatural-looking falloff near the edges.

Some manufacturers tout their latest generation of portable studio lights, like the Godox AD300 Pro, Profoto B10, Jinbei HD-200 Pro or SMDV BRiHT-360, which are designed exclusively for use off the camera, while still being small and light enough to fit in an ordinary camera bag. However, if you also want to use direct or bounce flash on-camera occasionally, then a hotshoe-mount round-head flash could be your tool to do it all.

Profoto’s A1 was the first dedicated round-head hotshoe flash and has spawned some imitators, as well as two successors, the A1X and A10. Similar-looking flashes existed before it, such as those bare-bulb flashes from Sunpak, Quantum or the original Godox Witstro series, supplied with round reflectors. But the reflector was removable and there was no fresnel in front of the flash tube. The key feature of these flashes is the round head, usually with the option of magnetic accessories like grids and colour filters. (Adapters like the Godox S-R1 let you use these accessories with conventional speedlights.)

Here is a quick round-up of all the ‘Profoto A1 clones’ currently available. Aside from performance, ease of use and price, another important factor is which camera brands each flash supports in TTL mode.

* = on-camera TTL support. May support other brands off-camera.
â€  = also known as the Flashpoint Zoom Li-on X, and Pixapro GIO1, among other names.

If this format proves popular, it may just be a matter of time before other flash manufacturers, such as Yongnuo, come up with their own versions.

Spotted any others? What do you look for in a round-head flash? Let us know in the comments below.