The Saberstrip has been available for quite a while now, but it was still something that was missing from the review section of LightingRumours. With the aid of Dutch store Cameratools.nl (thanks again for providing us with a sample) we finally managed to get our hands on one to review.

Basically, the Saberstrip is a very simple striplight for speedlights. No brackets, no complexity, one could say it rather looks like a cardboard shipping tube. You mount the flash inside and you are ready to go. There is really not much else to it.

I could imagine someone would ask why a striplight is so special? Well, striplights have a very unique look to them. You could say that they are creating hard and soft light at the same time. It is a great addition to the arsenal of a photographer to get a bit more of a harder look. Strip lights are also great as rim lights, since they are able to create a nice edge lighting on the whole subject.

I have to admit when I first opened the package and examined what was inside I was a bit disappointed. 129 dollars (US) or 149 euros (EU) for something that seems like a toughened cardboard tube is a lot, but this is not uncommon when buying products that are made for photographers. In the end the value for money is what matters. My initial thoughts were that even though it feels quite sturdy, it is surprisingly light.

What is good about the design is that they kept the weight as close as possible towards the mounting point, reducing the stress on the strip and improving the stability. A non-sandbagged lighting stand is still stable when the Saberstrip is orientated horizontally. Is it also possible to tilt the light over the subject, which could not be done if the mounting point were in the middle, since the light stand would appear in the photos. A boom arm is not needed any more. 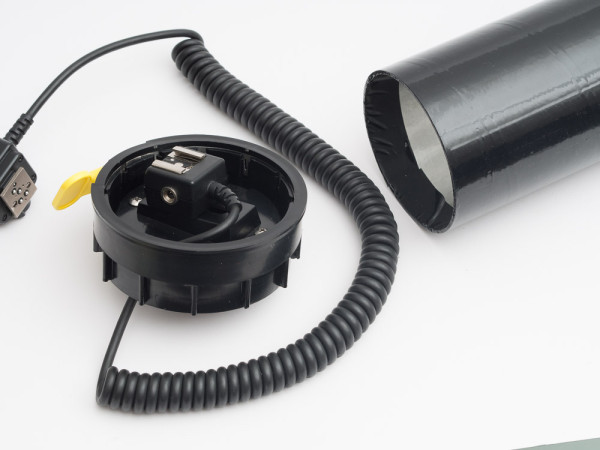 Unfortunately the design is not all perfect, and this is due to the fact that the speedlight is placed inside the tube. It is impossible to see or change the current settings, forcing you to remove the tube every time you want to adjust something. A trigger with remote power adjustments would solve your problems, but this is not as easy as you would think it is. Since the space inside the tube is limited and receivers such as the Pixel King or Pocket Wizards are quite big, it is not possible to mount the flash directly on the hot shoe of the trigger. You need a TTL cable and the flash trigger receiver has to be located outside of the tube.

Mounting the flash works as follows. On the strip itself there is one removable end, which also works as the mount for both the light stand and the speedlight. When the end is screwed on the light stand and the speedlight is inserted in the hot shoe (more on that later) the flash diffuser, or the tube, can be slid over the flash, after which a wing nut is tightened to secure the tube and the cap. The result is a speedlight inside the tube. It is worth noting that the Nikon SB-910 is really the biggest size you could fit in the tube. This flash is already a tight fit inside.

What is a bit tricky that removing the TTL cable requires a Phillips-head screwdriver, something you might not always have when shooting on location. For me the connection loosened over time, maybe due to the fact that I initially did not screw it tightly enough, but I ended up using it during a shoot with a semi-loose flash in the striplight. Not completely what I desired.

From my experiences during the testing I can conclude that the Saberstrip is built like a tank. The tube itself is made from a sturdy lightweight plastic (most likely fiberglass) and the diffusion cloth on the front of the tube feels like it could be used for professional sailing boats. From my experience with the Saberstrip it is not likely to break with some light abuse. You really need to mess up if you want to break it. It is made last and because of the lack of parts that require assembly it will not fail in these connections, which are usually the weakest link.

Unlike with softboxes, it is better to zoom the flash to its maximum setting inside the Saberstrip in order to achieve the most even light. Initially I did not do this and it is certainly something not to forget, as it has quite a big effect on the light quality. Luckily it is a mistake that is quickly resolved; when I did set the zoom correctly the light was much more even and from my tests I did not notice any hotspots on the diffusion screen.

Due to the smaller diffusion surface of the Saberstrip the light output is a bit higher than other light modifiers that are bigger. For example, my 60×60 cm softbox gives approximately one stop less light compared to using the Saberstrip. I do not feel that the Saberstrip is underpowered by using a speedlight, instead it gives a very reasonable exposure.

In order to properly test a product I believe that one should test it on multiple occasions in real world situations, and not in a studio set up. By being pressured to perform you can really discover the flaws in a product.Â  Similarly for the Saberstrip I tested it on several occasions, in different situations. Using it as main light, fill and as rim.

My experiences with the Saberstrip started roughly, but quickly improved. Initially due to the lack of modeling light and my inexperience with striplights it took some effort to get the light I wanted as main light. As I mentioned before, the light is hard in one direction, soft in the other and it takes some time before you really understand how this works. Normally I see how the light falls when positioning my softboxes but this was new to me. Since fill or rim lights are less dominant in a picture it was much easier to use it in this role. Especially when the Saberstrip is used as rim it provides some great light. If orientated vertically the rim light on the subject is long but yet still hard. I could imagine using this for product photography to separate the background effectively from the subject.

During my shoots I used a Manfrotto 026 bracket to mount the strip light. As with most umbrella brackets it can only tilt roughly 90Â° forwards and 90Â° backwards as well. The reason that is am explaining this is that if you want to have the Saberstrip orientated vertically, the minimum height you can position it is the minimum height of your lightstand, which is usually already quite high. This is certainly something to consider when shooting objects located close to the ground. In this case you could stack two brackets one top of each other, so you can tilt 180Â° forwards and backwards, pointing the Saberstrip effectively downwards.

One of the shoots that I did was during one of the more windy days in Germany. Using a umbrella was out of the question for sure and a softbox wouldn’t have been much better either. I was very glad that I took the Saberstrip, since due to the low profile it is almost unaffected by the wind. While using a relatively light lightstand the wind gusts made the striplight move a bit, but it never in the position where it could have fallen over.

Due to the fact that there is nothing to assemble the Saberstrip is very quick to set up; in under a minute you are ready to shoot. Even though it is not possible to decrease the size of the Saberstrip, it is still very portable. It is certainly not big enough to be a problem, but for a small location kit it might be a bit annoying, yet still manageable especially since the weight of the Saberstrip is so low.

The footprint of the Saberstrip is very small if orientated vertically, making it very useful in situations where either the space is limited or you want to avoid people accidentally tipping your light stands over, as can be the case with shooting proms or similar events. Also, it works great when you are trying to hide your flash behind something.

Summarized, the Saberstrip is a good product. Initially I was a bit surprised about how simple it looked, but in the end the simplenessÂ  proved to be the success of it. It is very light and sturdy. You have to be willing to comprise on some comfort due to issues with the design though.

No space inside the tube for triggers disappointed me: you are really required to use a cable to trigger the flash. Why they didnâ€™t include an additional mounting point for triggers on the exterior of the tube confuses me. Besides the cable I now need to buy an additional bracket to mount the trigger on. While I did test the Saberstrip with a TTL trigger, I can imagine that using â€˜dumbâ€™ triggers would be even more frustrating. Removing the tube every time you want to adjust the power is an annoyance for sure.

In the end the Saberstrip has its pros and cons. If you do buy this product you have to realize yourself that there are some cons with using it. They do not make it impossible to work with the Saberstrip, but can be quite frustrating for sure. That said, the Saberstrip is well made and does provide some unique features. You have to question yourself if the pros outweigh the cons; for me they do: I am willing to compromise on comfort to get performance, but I can imagine this is not for everyone.