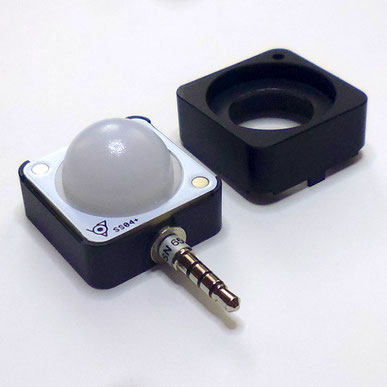 SmartSensor SS04, the plug-in exposure meter for Android smartphones, is now available from a new online store. Priced â‚¬59, the SS04 is a module that plugs into your mobile device’s audio jack and interacts with the free LxMeter app. Unlike some other light meter accessories for phones, the SS04 measures flash as well as continuous lighting.

An early review has appeared (in Italian) that praises the SS04’s ability to measure ambient light, making it a handy tool for film-makers and photographers using continuous lighting. However, the flash metering functionality is limited by the saturation point of the sensor â€” too bright and it no longer provides helpful readings â€” and the dependence on flash duration to evaluate exposure, making it difficult to measure the output of more than one flash simultaneously.

More exciting, though perhaps less useful, is the SmartSensor SS05, a plug-in Geiger counter that lets you measure radiation with your smartphone. It costs the same as the SS04, so you can weigh up the pros and cons of measuring visible light versus nuclear fallout.