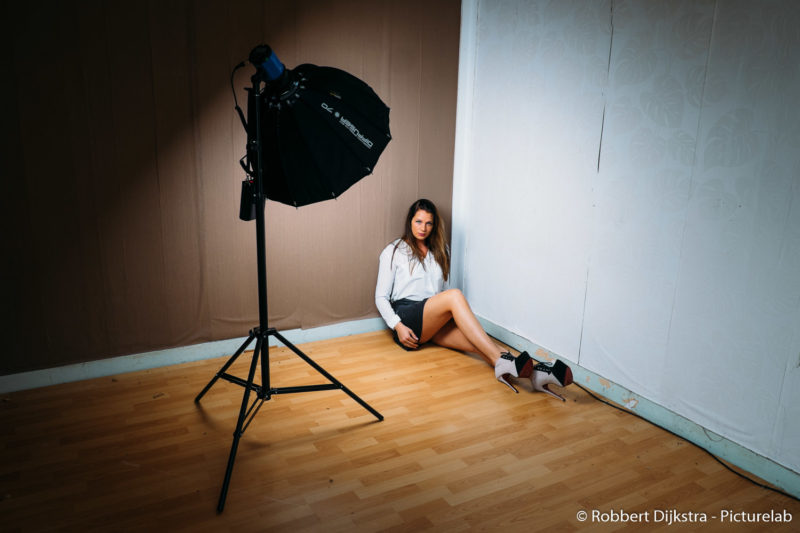 A while back David tested the Speedbox Diffuser-60 softbox from the Korean brand, SMDV. This softbox has a rather unique method of opening and closingÂ thatÂ enables it to be easy and fast to set up. One of the new product variants that have became available since David’s review is the SMDV 70cm dodecagonal softbox, or Diffuser-70. This softbox directly caught my attention, not only because of the unique name, but more due to the unique shape. The 12-sized shape means that the catchlights in eyes are more pleasing than from regular softboxes.

When I contacted SMDV I got the choice for which model I wanted to test. I opted to review the 70cm variant of the Dodecagonal, since the size would be a good match to be powered by a speedlight. This is also the biggest size they offer with a speedlight bracket. There are also bigger variants (up to 90cm) with Bowens, Godox Witstro, or Profoto mounts.

Before I opened the package the first thing I noticed is that this softbox is rather light. At 820g, including bracket, it is certainly a featherweight compared to other softboxes on the market that feature a heavier metal speedlight bracket. The SMDV softbox comes with a plastic speedring and speedlight bracket. In the speedlight kit the following parts parts are included:

Some assembly is required when you receive the softbox. The softbox fabric has to be attached to the speedring and likewise the inner and outer diffuser have to be attached before you can use it. For transport however you only have to remove the speedlight bracket. All other parts can be left attached to each other, meaning that when you arrive at your shooting location the softbox can be erected within seconds. 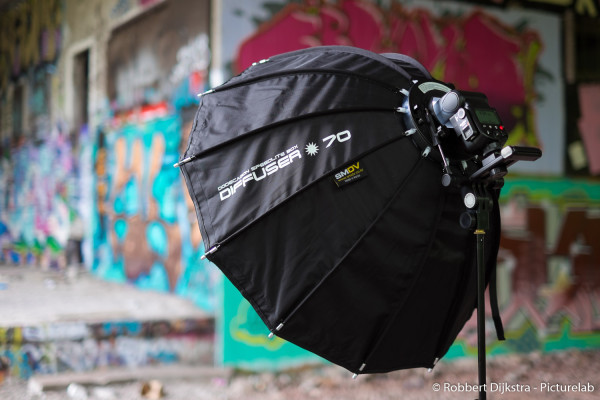 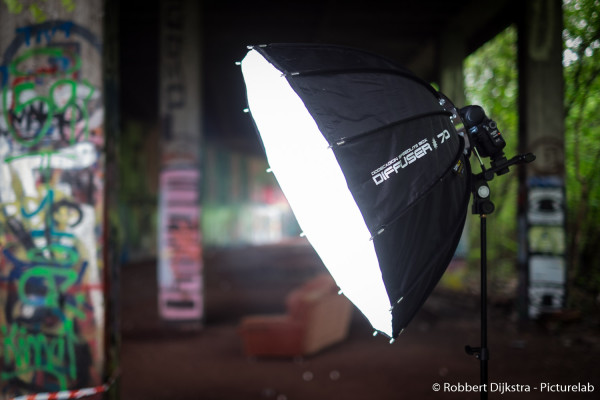 What is unique about the SMDV softbox is the way in which it opens. It is very easy and fast do so and the same can be said about closing. Basically you only have to open the softbox and attach the speedring to the bracket and you are ready to go. When stored it folds together, similar to other folding softboxes.

The SMDV softbox comes shipped with a lightweight carrying bag which can be used for transport. It has enough space to fit the softbox itself, the speedlite bracket and a small lightstand such as the Manfrotto Nano, making it well suited for those situations when you do not want to take a lot of gear with you. 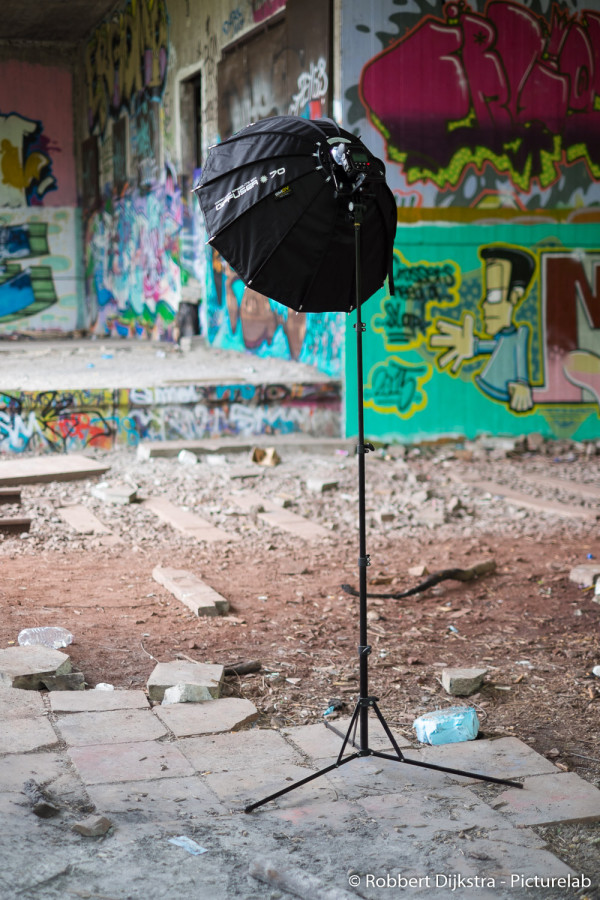 Although most parts of the softbox are made from plastic I do not have any concernsÂ about the build quality. Everything feels sturdy and secure when assembled. By using plastic SMDV managed to keep the weight down. Likewise, the fabric and the stiching of the softbox is of high quality as well. I did not mind the fact that the tilt bracket is made from plastic, since I do not have the feeling it is very flimsy or could break easily.

Foto-morgen.de kindly provided me with a Bowens adapter so I could use the softbox also with my other strobes. Replacing the speedlight bracket with the Bowens adapter is done by removing three screws. The screws that are used are very small and it is clearly not meant to switch the speedlight bracket and Bowens mount often. If I do it too often I am afraid that I would strip the thread on the head of the screw. 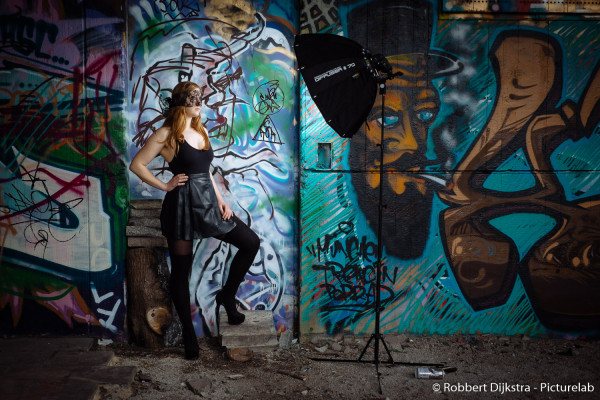 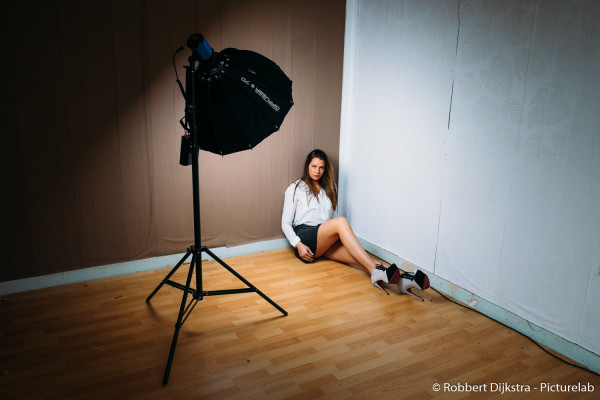 Over the course of the last few months I have used the softbox for various applications with great success. I have used it with either the Cononmark K4T or the Godox Ving V850. Due to the round shape the catchlights of the softbox are more pleasant than, for instance, a square softbox. For portraits, where the eyes are a very important part of the picture, a square catchlight can be easily distracting. With the dodecagonal shapeÂ the SMDV softbox has a clear advantage compared to traditional square softboxes.

At 70cm the size is good for a speedlight in order to get a reasonable power output. With the Godox Ving flash I did not really notice a lack of power for my portraits. 70cm would be the biggest size I would want to have when I would be shooting with a speedlight. The disadvantage of this size is that the light is quite hard when you want to shoot full body portraits. 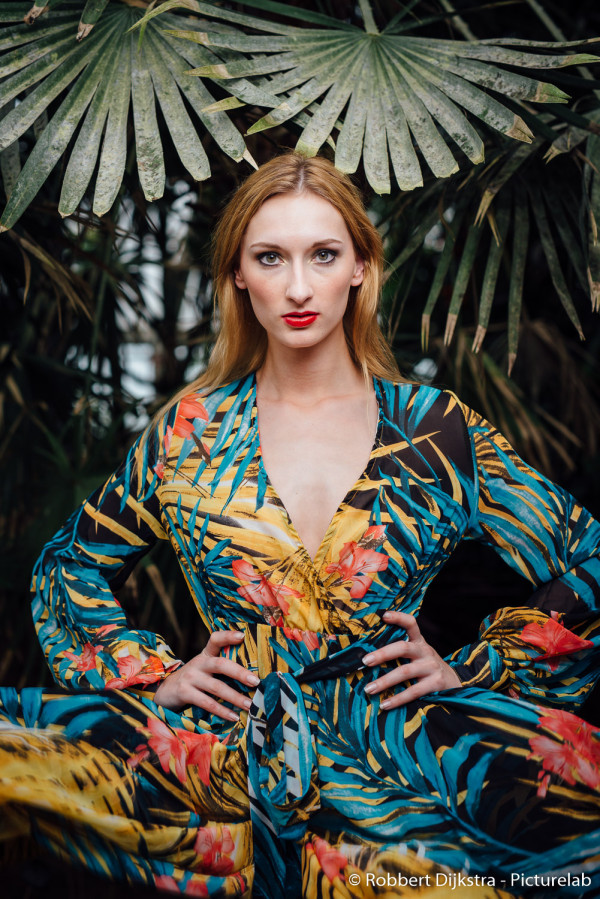 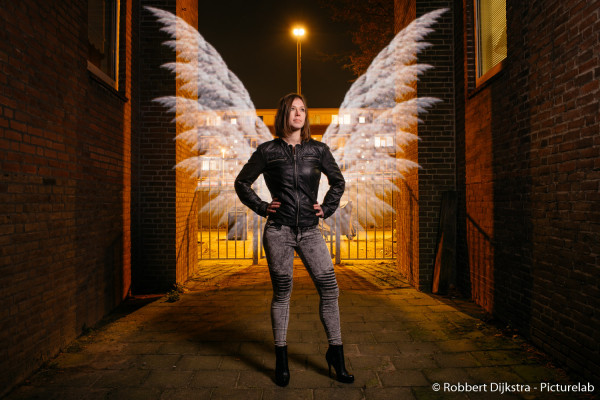 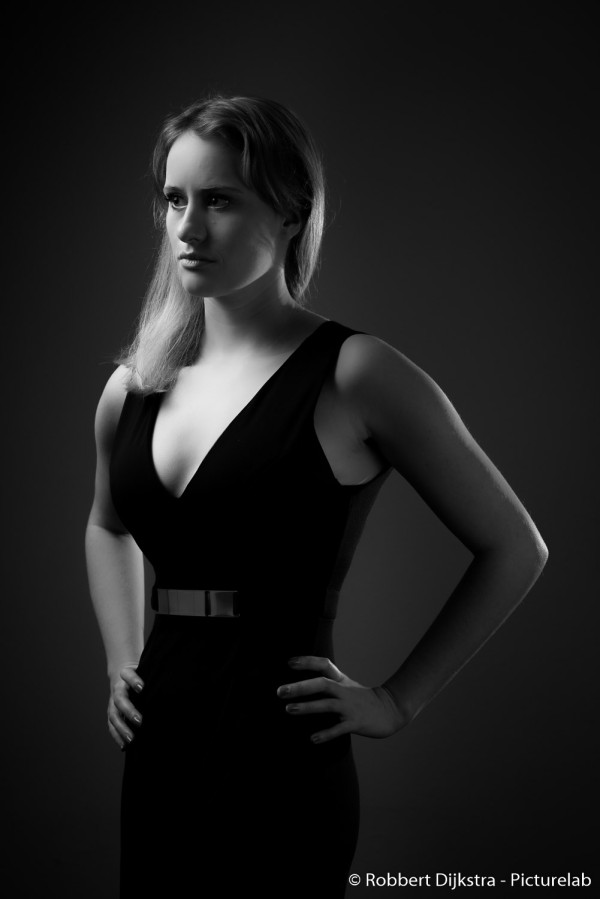 For me the biggest drawback of the SMDV softbox is the location of the front diffusion panel. It is located completely at the front of the softbox, not recessed as we see with other softboxes such as the Westcott Apollo. The effect of this unreccesed front panel is that there is quite some spill. Normally spill could be prevented with a grid, but unfortunately no grid is available for the SMDV softboxes. I dislike the fact that I do not have control over my light; I want preciseÂ control where my light will go.

Most of the time I have used the softbox paired with the Manfrotto Nano stand. This lightstand is significantly smaller and lighter than most lightstands found on the market but it also has problems with heavy loads. Every additional gram on top of the Nano lightstand makes it even more unstable. Since the SMDV softbox is rather light it works really well with the Manfrotto Nano lightstand. Personally for me the combination of the SMDV Softbox, the Manfrotto Nano and the Godox Ving V850 is great. A small and light setup with which no compromised have to be made for performance. The low weight also means that it works well on top of a boom arm.

While errecting the softbox is a breeze, it is more problematic to close it again. To close it you need to push two buttons simultaneusly with quite a lot of force. While personally for me this is still manageable, I can imagine that other people have more trouble closing it. Over time it does become earlier since it is possible to use some tricks to reduce the force which is required to close the softbox.

The SMDV Dodecagonal Softbox is not only unique due to its name, the 12 sided shape of the softbox makes it one of a kind as well. The easy opening and sturdy construction makes it enjoyable to use, especially for on location work. What is remarkable is that SMDV managed to make a relative sturdy softbox with a low weight. Softboxes from other manufacturers often feature an umbrella style of opening with thin metal rods, which are rather fragile. These softboxes are not much lighter than the one from SMDV and require delicate care if you want to keep them for an extended period.

What I dislike about the SMDV softbox is the spill of the softbox. I use softboxes because I want to have more control over the direction of the light and the amount of spill it has. The front of the SMDV softbox is not recessed and neither there is a possibility to mount a grid on the front of it. I think the biggest caveat is the price of the softbox however. For just over 200 euro it is more expensive than other softboxes that feature similar specifications.

Personally I really enjoyed used the SMDV Dodecagonal softbox since it makes a perfect trade off between portability and quality. It is a well designed piece of equipment, maybe one of most elegant ways to get soft light out of your speedlight. If you are a (semi-)professional you can easily justify the price, but as an amateur you might be better off with some cheaper alternatives. In the end I would certainly recommend it, if you don’t mind the price.

The sample in this review was provided byÂ SMDV. For more information, visit their web site here.