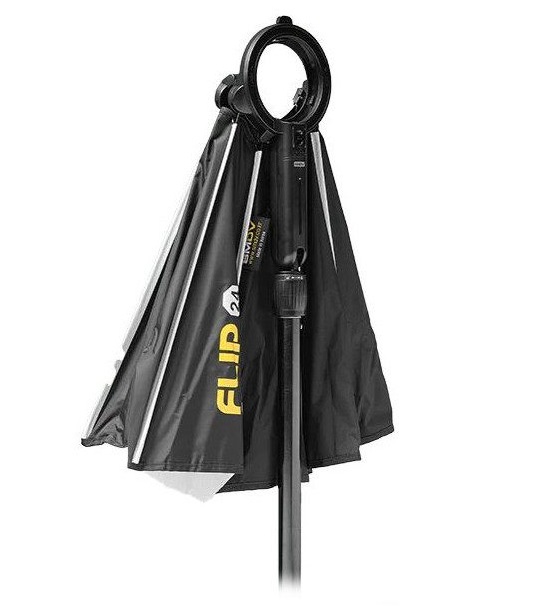 Korean manufacturer SMDV has announced the Speedbox Flip, a softbox that is fast to set up and folds flat. The company bills it as “the world’s first flippable softbox”.

Traditional softboxes are just rods and fabric, which can be time consuming to set up, but take up very little space disassembled. Newer easy-fold softboxes (including umbrella-style softboxes) can pop up and down in seconds, but they don’t pack down as neatly, usually forming a cylinder the size of the speedring or umbrella mechanism.

The SMDV Speedbox-Flip offers the best of both worlds: a light modifier that pops up and nearly instantaneously, while still folding almost completely flat.

It is different from other SMDV-made quick softboxes, such as the Glow Hexapop series, in that the speedring effectively folds in half, giving it a lower profile in your camera bag.

The modifier, which is large enough to support round-head flashes like the Godox V1 and Profoto A10, can be used with most shoe-mount speedlights. It is designed in such a way to allow the photographer to slot in colour filters, so you do not need to attach gels to the speedlight itself.

The softbox is doubly-diffused, made from aluminium and nylon. It comes in 24-inch and 20-inch (61cm and 51cm) diameter variants, and is sold with a different adapter according to whether you want to use it with the Profoto A-series, Godox V1 or a normal cobra-style flashgun.

Pricing in the USA appears to be around $140 from select distributors. The Speedbox Flip is already on sale in a few European countries for approximately â‚¬150.

What do you think of this type of softbox? Let us know in the comments below.