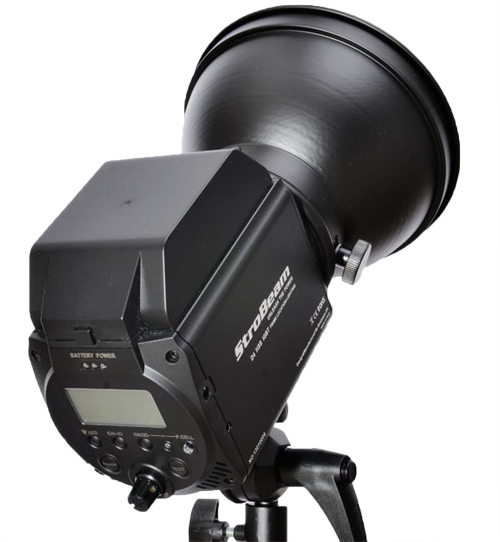 British photographic supplier StroBeam has announced the D4 IGBT HSS, the successor to the DL4, a portable battery-powered flash lighting system. The new D4 has a “integrated” battery pack that clips onto the top of the flash head, rather than connecting by cable. It is also claimed to support High Speed Sync (HSS) with Nikon and Canon cameras.

The StroBeam D4 is a 400J flash head that can be powered down to 1/128 of full power, adjustable with 1/3-stop precision either directly from the head or via proprietary “3.2G” remote controller, which also works as a flash trigger. There is also a 10-Watt LED modelling lamp, an LCD control panel, an optical slave cell and a battery level indicator. 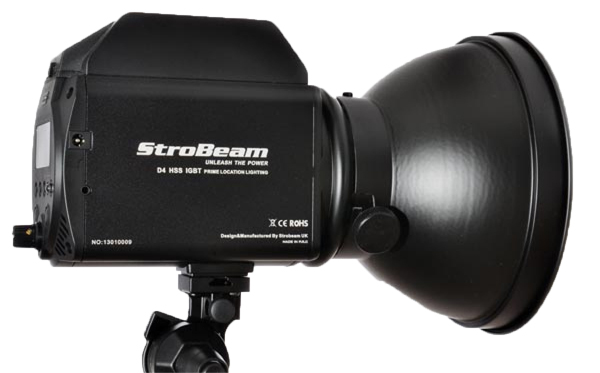 The D4 is manufactured by the same company as the CononMark Leopard AK4.0 (which we will be reviewing soon) and like the Leopard it is supposed to work at fast shutter speeds above the nativeÂ X-SyncÂ of your camera, all the way up to 1/8000 second. There are two models available: one for Canon and one for Nikon, the difference being in which StroBeam 3.2G remote controller you get bundled with the flash.

There are a number of other studio lights featuring batteries that fit into the head, including the N-Flash, PriolitesÂ and Rime Lite i4, but none of them offers speedlight-like functionality such as through-the-lens (TTL) exposure metering or high speed sync. The StroBeam D4 doesn’t have TTL yet but it could just be a matter of time. It looks like the D4 is probably more of a conventional monolight with a fast-syncing trigger built in, rather than an oversized hotshoe flashgun.

Harbord praises the modelling light and battery life, and says the colour consistency is “excellent”, but criticises the unit’s “poor” LCD control panel for insufficient backlighting and could not get the FP Sync function to work on his pre-production sample. He also says there is no sync port (on his unit at least), which means you can only trigger the D4 using the proprietary remote or with the built-in optical slave â€” third-party triggers cannot be used.Â Update:Â There is a sync port in the final model. (Please refer to this more recent reviewÂ by Paul Ward.)

“All in all these are good heads, there are a few niggles with them but then show me a product that doesnâ€™t have a few of those. Iâ€™d say you wonâ€™t be disappointed if you buy a D4 HSS, they work well and do what theyâ€™re intended to and that’s pretty good in my book.”

It looks like some details on the specifications are not clear yet, as the final retail models may have some differences from the unit evaluated in Phil Harbord’s review and StroBeam has not published an official spec sheet on their web site yet.

You can order the D4 HSS IGBT directly from the StroBeam web site. Individual heads for Canon and for Nikon are Â£500 each, excluding VAT. There are also twin head kits, starting at Â£899. StroBeam will also be at theÂ Focus On ImagingÂ trade fair onÂ stand E42Â from 3rdâ€“6th March 2013 at the Birmingham NEC.

What’s next? A monolight with TTL?

Let us know what you think about this product in the comments below. I will be attending the Focus show next month, so if you have any questions I can put them to StroBeam directly.