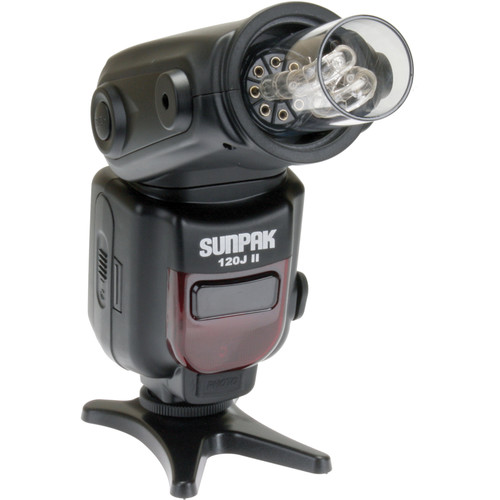 Originally announced earlier this year, the Sunpak 120J II is the follow-up to the original Sunpak 120J, which was released back when the world was still in black and white. It achieved a cult fanbase among photographers seeking 360° light spread in a compact package — something not offered by other big studio lights or narrow-beam speedlights. In recent years, calls for a modern version of the 120J have been answered to some extent with the Godox Witstro, Falcon Eyes Strobe Gun and Caler Mini Flash series, but unlike the new 120J II they all required bulky external battery packs.

The advantage of a bare-bulb form factor, as opposed to a fresnel/zoom head, is that it can be used inside softboxes and other light modifiers with a very even light spread, much like a bare household light bulb or a mains-powered studio lamp. Coupled with a Bowens S-type softbox adapter or something like the Firefly Beauty Box, you can have soft lighting in a very portable kit.

Like the latest Kodak cameras, the new flash shares only the brand name with the original. The Sunpak 120J II is actually a rebadged Triopo TR180, made in China. It runs on four AAs, with an external power pack to speed up recycle times. As well as manual power mode, each flash supports E-TTL for Canon or i-TTL for Nikon. Everything can be controlled through the large LCD panel on the back of the unit.

Each kit comes with a 120J II, a reflector and an external battery pack capable of supporting two flashes at once. Visit B&H Photo to order one now for Canon or for Nikon, both priced at $299.