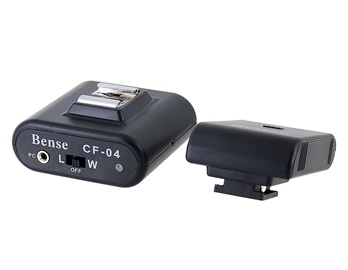 Cheap fakes of Western and Japanese brand electronics are commonplace. Apple iPad and iPhone clones are rife. But what happens when an already cheap Chinese device gets knocked-off by another Chinese company? Will it be a perpetual race to the bottom?Â Yongnuo, the Shenzhen-based photo accessory manufacturer, have apparently become sufficiently well-known and reputable in the market that other Chinese companies have started copying their products.

Here are the original Yongnuo CTR-301 and RF-602 wireless flash triggers, both of which have proven very popular.

And now here is something called the Bense WF-800S, also known as theÂ Fotga RF 2400. Similar, but different from the RF-602?

Whoever actually makes these – Bense, Fotga, Nicna, or someone else – some users have already complained of quality issues.

What’s the most important lesson to learn here? That some cut-price manufacturers have become reputable enough to be equivalent to the likes of Canon, Nikon or Apple, and therefore worth copying? Or that some otherÂ manufacturers simply have no ideas of their own and will copy just about anything that might sell?

Yongnuo appear to deem the threat sufficiently serious that they have issued a legal warning on their web site to would-be copiers of the styling of their YN-160 LED panel. Pirates, ye be warned.