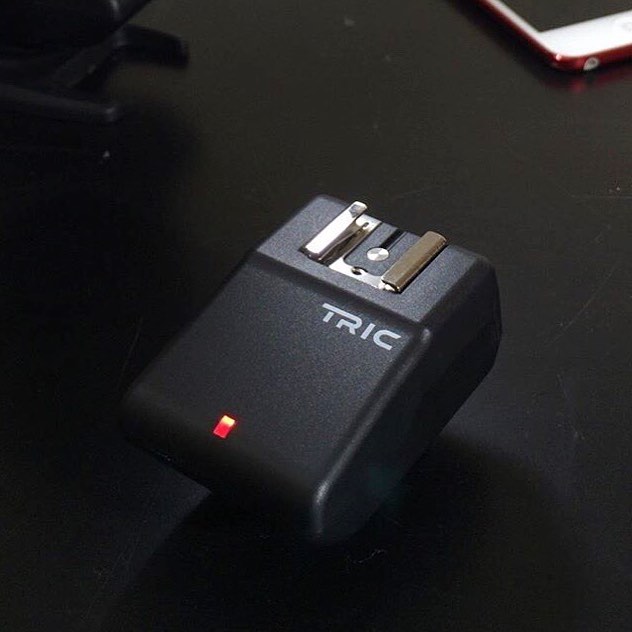 It has been a while since we reported on the Tric trigger. Back in 2015, a Kickstarter campaign was launched to find backers for the project, but the campaign was stopped prematurely. Instead, the engineers decided to get the funds together themselves and still launch the Tric, albeit in a different way. At the end of 2015 the Tric trigger was available for $58 at www.tricflash.com.

With the recent introduction of the Godox A1, it is good to look back at what Tric had to offer. It is the world’s first trigger that is made for smartphones—specifically, iPhones. This little device is meant to synchronize the iPhone camera and external Xenon flash units through the use of Bluetooth. You start by downloading their app, turn on Bluetooth on the phone and connect it to the Tric. Now each time you will use their app, TricCam, to make a photo it will also fire the device located in the hotshoe of the Tric.

I used my Tric with an older SB-28 flash that has auto-mode, meaning auto-thrysistor mode. The speedlight measures the returning light and stops power output when the returning light has reached a certain value. Since the Tric has no TTL mode, this is the best you can do. It works quite well and have used it during a few parties with friends.

Personally, I was quite surprised how much fun it was, but there are some limitations due to the usage of Bluetooth and the electronic shutter on the iPhone. The maximum sync speed is limited to 1/30 second on my iPhone 6+; on newer models it is 1/45 second. Combine this with the fixed aperture on the iPhone and it means that the Tric can only be used in low light. Most of the time you would want to use flash is when the ambient light is indeed low, so it is not such a big problem.

Photos that I took with the Tric were rather impressive for a smartphone, but it comes down to this. No matter the fancy flash or setup, an iPhone is still an iPhone. The reason why it is a good camera is because you always have it with you. If you are going to bring a flash anyway, why wouldn’t you bring a camera to go with it? And I think the answer to this question is because we can. Sometimes it can be enlightening to challenge yourself with something basic and in the process just have fun.

Would I recommend the Tric? Well, for $58 I think it is quite easy to justify the purchase. Although I doubt it that I will use it for commercial work, I had quite a lot of fun with it and it made me realize again that good light is far more important than a good camera.