Redsnap, by Triggertrap, is a new modular camera triggering system being launched on Kickstarter. The device has raised Â£120,000 (of a Â£50k target) in support as “an infinitely expandable camera trigger, making high-speed, camera trap, and timelapse photography affordable for everyone.”

The company, based in London, previously appeared on Kickstarter to crowd-fund their Triggertrap “v1” two years ago. Since then they have developed the Redsnap, an improved design of the trigger whereby the user need connect only the sensors they want for a photo-shoot.

“Triggertrap Redsnap uses interchangeable sensor modules that you can snap on when you need them, and tuck away in your camera bag when you don’t,” reads the campaign page. “It has three outputs, so you can hook up three cameras, three flashes, or a combination of both. Powered by two AA batteries, it can keep your timelapse running for months.” 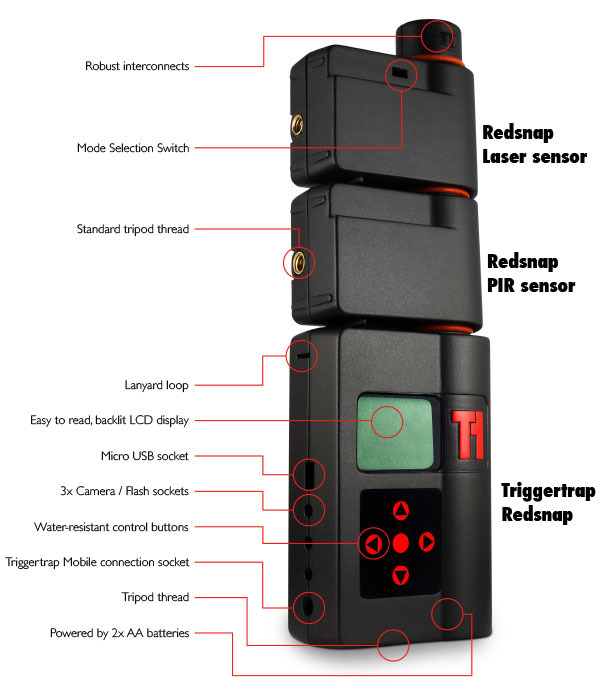 There are a number of different triggering modes including time-lapse, HDR, star trails and “TimeWarp” mode, where the intervals change during a time-lapse to give an accelerating time effect.

Four different modules will be available including laser, sound, light and passive infrared sensors. Combining more than one of these allows you to set more advanced conditions for a shoot, such as using both sound and light sensors so camera only takes photos when it hears noises during the day. The system also works with Triggertrap Mobile, a smartphone app, for features such as facial-recognition triggering.

The Kickstarter campaign has already raised twice its Â£50,000 goal, but there is still time to support the project. Contributions of Â£35 or more entitle backers to various Redsnap kits. Visit the project page for more details. The deadline for funding is Friday 15th November 2013.

Are you interested in such a system? What can you see yourself using it for?