Where once there were not really any worthwhile Chinese makers of camera flashes, now there are a good number competing with each other. Triopo, a company better known for its tripods (nominative determinism or what?) has been trying to challenge Yongnuo’s dominance in cheap flashguns. The latest offering is the TR-960II, promoted by some sellers as a direct competitor to the popular YN560-II from Yongnuo.

Both devices work in full manual mode, making them a good choice for beginner photographers on a budget or off-camera flash enthusiasts and professionals looking to build multi-light setups. The Triopo also apparently features an “MA” mode, that is, non-TTL automatic metering, which can be used both on and off the camera hotshoe when you don’t have time to adjust the light levels yourself.

The TR-960II flash head tilts and swivels, has a flip-down diffuser panel and zooms from 18-180mm. The guide number is 35 at the 35mm setting and 52 at 180mm, with a recycle time of approximately four seconds without an external battery pack. Power can be adjusted all the way down to 1/128 in 1/3-stop increments, using the large backlit LCD control panel on the back.

Should you want to set up flashgun off the camera, it can be synchronised using the hotshoe foot, PC jack or built-in optical slave cell. I am not sure what has been added since the original TR-960 Mark I, since the older model appears to have been discontinued. 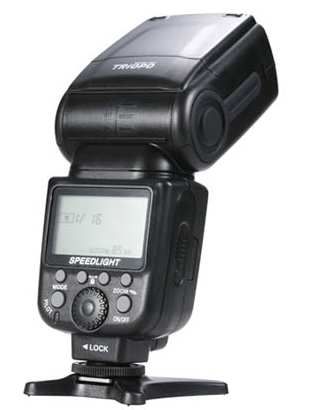 Which is better, the TR-960II or the YN560-II? Without going hands on, it is hard to say. It may just be down to personal preference, or which one is available for the best price at the time of buying. The main difference is Triopo’s Nikon-esque styling and use of a Nikon type external power port, whereas Yongnuo takes its design cues from Canon.

You can find the TR-960II for around $55â€“60 on eBay, which at the time of writing is around $10â€“15 cheaper than its Yongnuo counterpart. Have you used this product? Share your thoughts in the comments below.