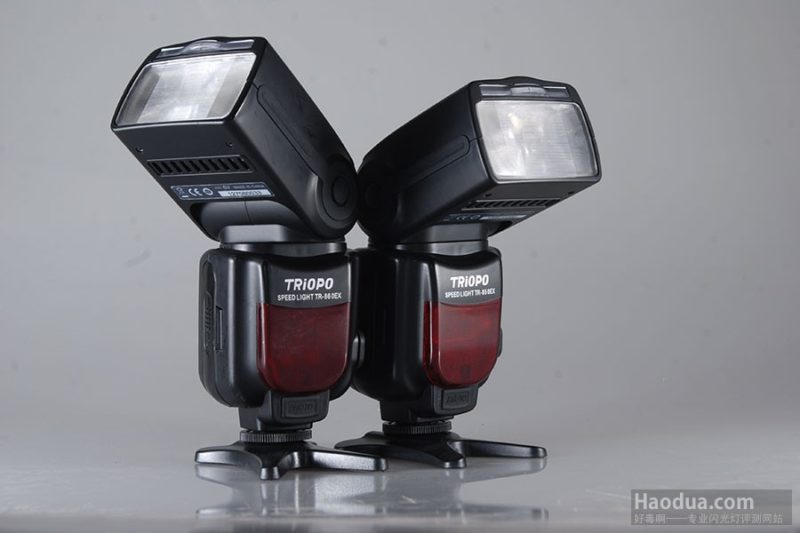 Last yearÂ Canon unveiled its radio triggering system, making it the first camera manufacturer to move away from line-of-sight signalling for external flash synchronisation. The arrangement consists of the ST-E3-RT radio transmitter and the 600EX-RT flash unit (which can also be used as a transmitter) providing E-TTL and manual control via 2.4GHz radio waves.

Despite breaking new ground, not everybody was excited by the announcement. A two-light off-camera kit will set you back over Â£1,000 and isn’t compatible with DSLRs older than the EOS 5D Mark III or 1D X, so it is understandable that some photographers were left feeling a bit miffed.Â Chinese manufacturer TriopoÂ apparently wasn’t happy with Canon’s 600EX-RT and ST-E3-RT either, so they’ve developed their own system of radio-enabled speedlites from scratch.

Triopo’s solution has two different flashes: the Speedlight TR-860EX and TR-850EX, both packing built-in radios. In an article entitled “The common enemy of PocketWizard radios and the Canon 600EX-RT: Triopo TR-860EX flash”, Chinese site Haodua.com explains Triopo’s new system and shows pictures of it in action. 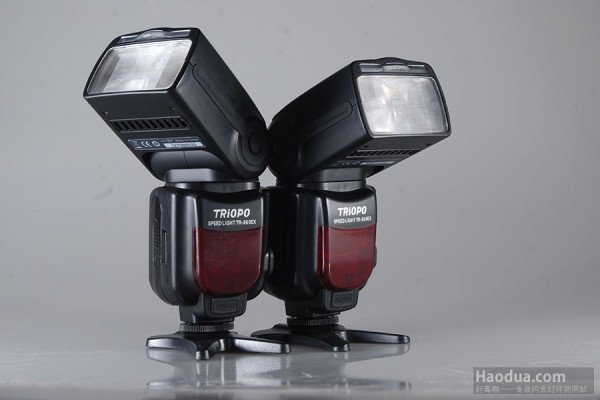 Using the Triopo Speedlights you have the benefit of 2.4GHz Master control including A:B and A:B+C modes and ratios from 1:8 to 8:1, plus high speed sync (HSS), multi (stroboscopic) mode, manual control, front- and rear-curtain sync and regular on-camera E-TTL. This is more advanced than the Yongnuo YN560-III, which has just a manual receiver inside for basic triggering.

The TR-860EX and TR-850EX are the same shape as theÂ Triopo TR-980-series flash units and both can act as radio commander or slave, the principal difference being that the TR-860EX, as the 600EX-RT-pretender, has full features whereas the TR-850EX has E-TTL disabled when positioned off-camera. The 2.4GHz signal range has been tested to be around 50 metres and there is no optical transmission available in either of these units.

While operating in the same 2.4GHz frequency band, the Triopo TR-860EX is not actually compatible with the 600EX-RT and relies on a bit of trickery â€” similar to that used by the Yongnuo YN-622CÂ â€” to communicate with Canon EOS DSLRs. Rather than pretending to be a fully-fledged 600EX-RT (whose protocol was presumably too difficult to hack) a hotshoe-mounted Triopo flash in fact tells the in-camera menus that the speedlite is sending optical signals, then sends out radio waves instead on the sly. Sneaky!

The wireless channels set from the camera menus are ignored by the TR-860EX, which needs to have its radio channels configured on the flash unit itself.Â Since Triopo has been able to fool Canon’s cameras into thinking it is something like a 580EX II optical master, the TR-series does not have the same problem with backwards compatibility that Canon’s own system faces. Supposedly the TR-860EX and TR-850EX will work with any EOS DSLR back to the original 1D, 10D and 300D, though whether every single camera enjoys the same functionality isn’t confirmed. It has also suggested that there will be a Nikon version.

On the other hand, what is Triopo’s strength is also their main weakness, since it is a closed system. The TR-860EX will only communicate with another TR-860EX and TR-850EX, meaning the company should throw their full weight behind the project and bring out a full range of other devices â€” including a dedicated transmitter device and a small 270EX-like flash â€” or it might not be attractive enough for photographers to invest. The pricing, release date and distribution are also all unconfirmed at this stage.

In their hands-on testing of the system, Haodua.com described the TR-860EX as “too bulky” with a “very complex” interface that is “not an easy thing to master” for beginners, recommending that Triopo bring out their own interpretation of the ST-E3-RT so that the system is easier to control. However the units they were testing were engineering samples so there may be some improvements before we see the final retail versions in shops. There is no USB port so it might not be easy to update the firmware after you’ve bought one.

Pricing and availability of the Triopo TR-860EX and TR-850EX has yet to be announced.