Foxpic, a UK photography retailer, were kind enough to send me a copy of the Triopo TR-986N to review. The TR-986N is a new entry-level-to-mid-range flashgun with Nikon i-TTL support, high-speed sync, manual power adjustment and a full colour screen.

In this review I will compare the Triopo TR-986N against the Yongnuo YN560-III. Though they have different feature sets (the Yongnuo lacks TTL) they have similar price points and until now I have considered the Yongnuo my de facto primary flashgun. Except for built-in radio, the Triopo has more bells and whistles, so will it become the first flash I put in my camera bag?

The Triopo TR-986N is marketed as an “easy to use flash with professional features”. This is no flagship and priced at Â£39.99 (about $60), it doesn’t need to be. The feature set includes: 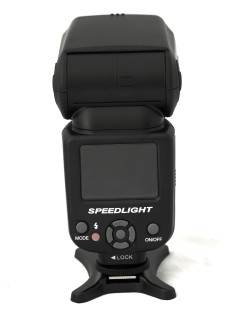 There is no lock on the tilt head, but it is reasonably stiff so you might be able to fit some lightweight modifiers. There is a laser-style AF assist lamp that I’m not the biggest fan of â€” though it technically works, I prefer the brighter built-in light on my Nikon D700. The build quality is very good and the battery door seems fine.Â The locking wheel is a bit small and stiff, but does the job.

All in all, it offers a lot of features for very little money. There are other Triopo flashes that offer built-in radio, but this is not one of them. Extra radio receivers aren’t expensive though and Foxpic, who provided the sample for this review, even bundle flash triggers in some kits.

My Sekonic L-358 flash meters suggest that at Iso-200 at a range of two metres, the Yongnuo YN560-III reads f/29 at full power while the Triopo TR-986N only gives f/22. That’s about 2/3 of a stop difference, or around 35â€“40% less power. When I am shooting events I use bounce flash a lot â€” requiring me to push everything to its limits in some venues with high, dark ceilings. Probably manyÂ people don’t shoot this way, but if you wantÂ all the power you can get then this might not be the flash for you.

High-speed sync seems to work without issue up to 1/8000 second, but here is another area where a shortage of power quickly becomes a problem. 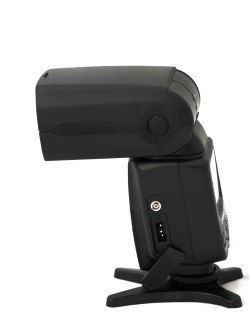 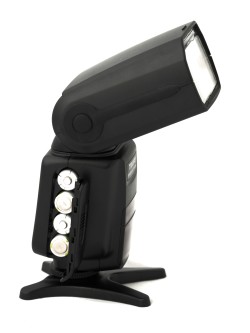 In their marketing, Triopo claims a “super fast” 2.9 second recycle time. Maybe they use better batteries than me, but with my Panasonic Infinium AAs I was only able to manage 4â€”5 seconds at full power (while the YN560-III recycled in just under 3 seconds). Still fine for my pace of shooting, but quicker snappers might want to plug in an external battery pack.

One other thing that I should mention is that the Triopo TR-986N constantly emits a quiet but annoyingÂ very high-pitched whine from the capacitors.Â I don’t know if this is exclusive to my sample unit, or if anybody over the age of 30 can even hear it, but it drives me mad. It is not as loud as what you get from some 30-year-old flashguns, but none of my more modern flashes make any noise except while recycling.

The TR-986N is part of a new trend of flashes with full-colour screens, as opposed to the monotonous LCDs, LEDs and physical switches from days of yore. Until trying the flash for myself this sounded like a gimmick to pad out the feature list in a saturated photography market. In fact, the colour screen makes a noticeable difference: instead of having to read the words and symbols on the screen when cycling through modes, you “just know” when you are in manual mode versus TTL mode and so on.

The modern-looking interface makes the experience that much more pleasant on a screen that is large, clear and bright. The controls are pretty consistent between modes, though there are one or two quirks, such as only being able to adjust flash exposure compensation in TTL mode 1/3 of a stop at a time.

Screens I have come toÂ expect to be quite arcane and complicated â€” such as Wireless and Multi modes â€” are in fact self-explanatory and very easy to read.

Wireless offers the option of four different optical slave modes: S1, a basic slave; S2, one that ignores pre-flashes; Nikon AWL slave, with 4 channels and 3 groups; and Canon Wireless with the same control. Personally I don’t use advanced optical slave systems, but they are a very useful thing to have access to when improvising or when other equipment fails. 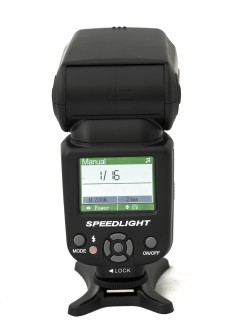 Like the Yongnuo YN560-III, there is a lot of customisation available, though you have to find the menu first. Holding down the centre button for three seconds will bring up the custom functions menu, from where you can toggle the ready beep, the AF-assist lamp and the sleep mode. You can also switch languages between Chinese and English (don’t worry â€” it is English by default).

The instruction manual is also printed in full colour, which is nice.

I wasn’t really sure if I could depend on the Triopo, whether its colour screen would drain the batteries too quickly or whether it would be able to handle heavy use on a proper assignment. But this week I’ve taken it to my events, with my trusty Yongnuo YN560-III in reserve just in case. I could have done with some extra power but I never needed to grab the Yongnuo.

Despite all the Triopo’s extra operating modes, they don’t get in the way of simple operation and the TR-986N proves just as easy to use as the YN560-III. Bugs, misfires and software glitches were nowhere to be seen. When direct on-camera flash is (occasionally) needed, i-TTL support is also a nice thing to have.

At the price point, the TR-986N offers a compelling feature set, solidÂ build and a pleasant user experience. If you are looking for a decentÂ all-round flash with Nikon i-TTL support and HSS for a low price, this is it. The graphical interface is second to none and might be the standard by which future flashes are measured.

However, the performanceÂ isÂ disappointing and the constant capacitor whine is irritating. As someone who needs raw power more often than advanced TTL features, I might stick with my YN560-III for now.