The international version of Innovatronix’s Explorer Mini battery pack will soon be released, to accompany the North American model which came out in June. The manufacturer estimates the Tronix Explorer Mini 230V will ship to dealers around the 20th August.

A number of tests and reviews of the 115V Explorer Mini have already surfaced:

The 230V Explorer Mini will come in Schuko (Europlug) and universal (multiplug) versions, but will only have one output socket, compared to the 115V Mini which has two.

The explanation for this change was that European sockets take up a lot more space than North American ones, and “the chassis can only accommodate 1 socket” of the larger kind for safe operation.Â You can still plug in multiple lights using a power strip, so long as the Mini isÂ compatible with your lights. 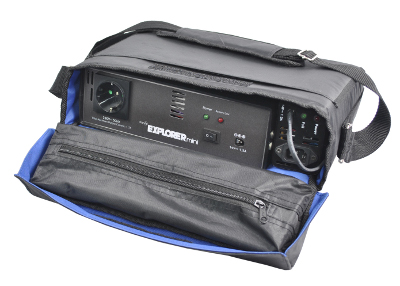 Designed for portability, the Explorer Mini weighs around 5 kilograms. It is compatible with a wide range of studio lights, even multi-voltage ones, and capable of powering two flashesÂ simultaneously. Full specifications are available on the manufacturer’sÂ product page.

The Tronix Explorer Mini has a retail price of US$349, which includes the carrying case.Â As well as ordering directly from the Philippines, there are Innovatronix distributors around the world. The latest include Mikrosat Germany, Mikrosat HungaryÂ and Dynamic SquareÂ of Saudi Arabia.