We got a quick preview of the Phottix Mitros, Ares and Atlas II at the autumn 2012 edition of Hong Kong Electronics Fair.

Going hands-on with a pre-production model of the Phottix Mitros speedlight for Canon, the interface feels pretty straightforward, though not idiot-proof. The screen is not the biggest or the most colourful on a hotshoe flash, nor does it feature fancy touchscreen technology, but it is reasonably clear and easy to read.

After just a minute or two playing around with the device it became pretty clear how to set up most of the Mitros’s various functions including E-TTL, manual and stroboscopic mode. The master and slave mode and HSS were in there somewhere but not tested. Since the flash is still “in development”, we cannot draw any conclusions on how well or consistently it performs, so wait for a full review.

Company representatives stated that the price and exact launch dates for the Mitros â€” which will be available for Canon, Nikon and Sony â€” will be announced later.

Also in the Phottix booth was their long-range Atlas II flash trigger. Prioritising performance over bells and whistles, there is not much to describe here. Though the samples did actually work in the convention hall that was otherwise crowded with thousands of other 2.4GHz devices. We can’t say the same for the Exhibition Centre’s WiFi! 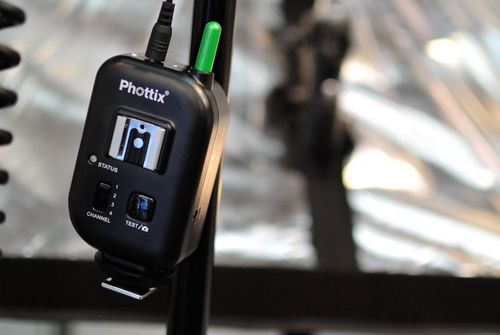 The Phottix Ares radio trigger is also pretty simple but does have its unique flippy-uppy transmitter. The hinge doesn’t seem to lock in either the horizontal or vertical orientations, so you can shoot with it at 45Â° angle if you so desire.

Unlike the company’s other recently-announced products, the Strato TTL was absent from both Phottix’s stall and their latest catalogue, suggesting its release date is a long way off yet. Still, if the wait got too much then team Phottix appeared to have supplies on hand:

So who was at the trade showÂ â€”Â billed as the world’s biggest electronics event â€” besides Phottix? 3,900 exhibitors came from China, Hong Kong and the rest of the world to show off their latest consumer technology products. Since there are a number of shows dedicated to photography equipment, including last month’s Photokina fair in Cologne, photo accessory manufacturers were few and far between at this event. There were a few cheap compact cameras, a number of shockproof sports cameras (Ã  la GoPro) and lots of cameraphone accessories, including these ridiculous telephoto lenses:

There were also some portable power solutions. Solar power is great (and featured in some bluetooth speakers) but not if you live somewhere with dreary weather, like the north of Scotland. Fortunately, a remedy is at hand: wind-powered phone chargers.

There was a clash of old and new with these stylish LP turntables: 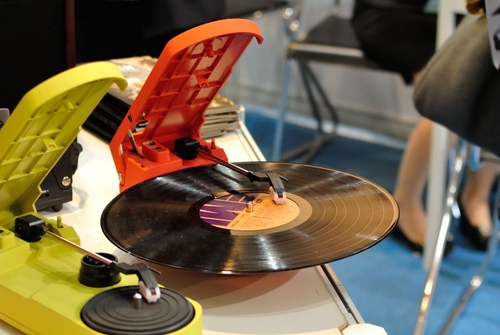 But if you think that physical discs, CDs or paper are just too much bulk to carry around, solid state memory could be the way forward. One company wants to make the Gideons hotel-room Bibles obsolete with dedicated Christian MP3 players.