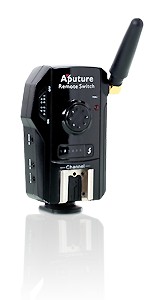 The 433MHz transceiver flash trigger, Trigmaster Plus has been released, according to the company. The new unit is on its way to retailers in Italy and Germany, with further shipments to follow. Following the Phottix Atlas, the Aputure Trigmaster Plus is the second budget wireless system based on transceivers. You can read more details in our previous article written when the system was first announced in March this year. No firm prices or specific release dates are available yet.

Compared to the original Aputure Trigmaster Versatile Trigger, the Trigmaster Plus has “interlink” technology allowing you to use one unit to trigger a remote camera and associated flashes synchronously.

The long-awaited ControlTL system for Nikon is slated for release in “mid December”. Canon versions of the PowerST4 (for Elinchrom RX) and AC3 ZoneController are already shipping. It is recommended to update the firmware of all your transceivers to the latest version before adding new modules to your system.

Radiopopper, a third party manufacturer of flash triggers, have had theirÂ company web site redesigned, now making it much easier to find out about the different triggering systems on offer.

A new continuous LED lamp, the SYD-1509 has 135 diodes in a 16:9 orientation with adjustable brightness. Coldshoes on the side allow you to stack multiple lights into a large array. Each unit is powered by six AAs or one DV-type NB3L battery (rechargeable via USB). The Yongnuo SYD-1509 is priced at $66.99, including a camera bracket and 12 month warranty, from Yongnuo’s official online store.

Even more advanced, the YN-160 boasts 160 LEDs, barn doors and interchangeable filters with a tilting mounting bracket. Price and availability have yet to be announced.

In the flash market, new product images have been published for Yongnuo’s upcoming Wireless TTL System.