Following the launch of JYC’s new Viltrox photo accessory brand, the company has sent us some samples products to evaluate. In this review we’ll be trying out the Viltrox JY-680 manual speedlight. Later on, in a separate article, we’ll test the Viltrox JY-670 macro ring flash. 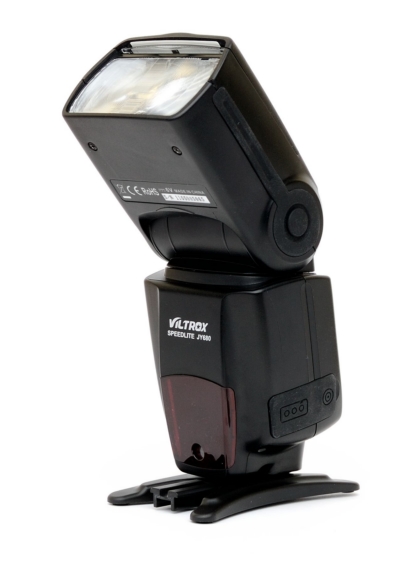 The Viltrox JY-680 is an all manual speedlight designed for off-camera “strobist” use. There are no TTL or automatic modes, but you do get two optical slave modes and manual adjustment down to 1/128 of full power. 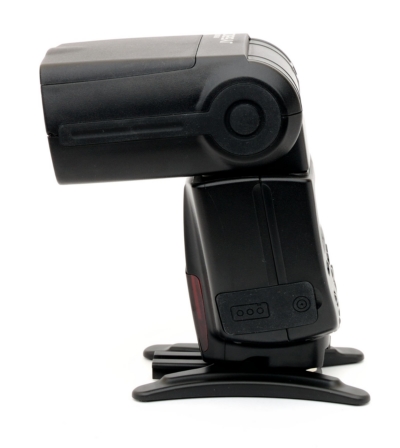 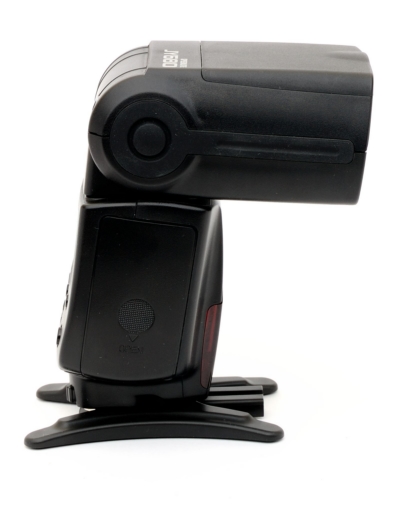 Taking a look at the body of the device, you may notice that the JY-680 is the spitting image of Canon’s 580EX II. One of the current trends in Chinese flashes is to make them look like the Canon & Nikon flagship speedlights 580EX II and SB-900. This isn’t purely Shanzhai thinking though – it means that existing flashgun accessories, such as diffusers, will still fit these new lights.

The Viltrox JY-680 can swivel 180Â° right and left and tilt upwards 90Â°. You can just push the head to turn it – no need to squeeze a release button. 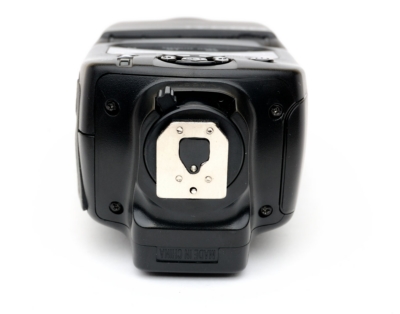 Pleasingly, the Viltrox JY-680’s mounting foot is made of metal, rather than plastic, and should therefore stand up to the strains of regular use without breaking. The first batches of the Yongnuo YN-560 had weaker plastic feet, but units YN12840000 onwards are metal.

As well as the metal foot, Viltrox have decided to go with a locking lever and pin like the 580EX II. It should be quicker and less fiddly than the rotating ring found on Yongnuo flashes. 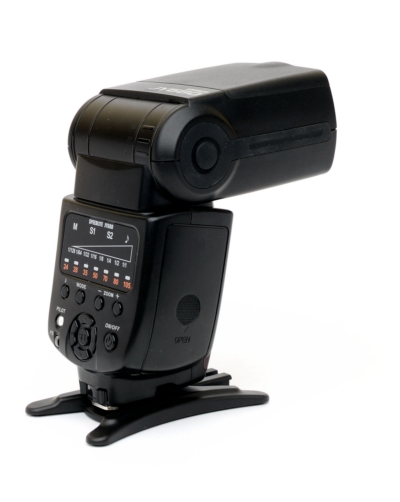 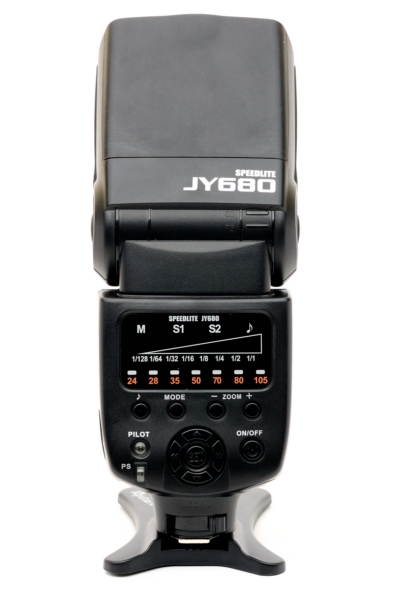 All of the JY-680’s controls and indicators are found on the back panel. Power level and zoom position is denoted by two separate rows of “idiot lights”. As Viltrox puts it,

There are two separate indicators on the LED indicator panel, which is more favorable than currently the other brand’s only one line indicator.

This will be an oblique reference to the Yongnuo YN-560, which only has one row of lights for power and zoom.

Additionally you can “fine tune” your power level with the up and down buttons, increasing or decreasing brightness in 1/3 stops. Since there aren’t actually any partial stop indicator lights, you have to do this blindly and remember your adjustments. Pressing “up” or “down” three times will take you from one LED to the next.

You can turn the ready beep on or off with the “musical note” button.

The JY-680’s display panel is absolutely brilliant in low light, as you instantly see the relevant numbers (e.g. “1/2”) without having to learn binary, and they’re always on. In daylight it can be a bit harder to read, but you’re more likely to be using a flash when it’s dark, aren’t you?

On the front of the device you’ll find a red window – mostly for show – surrounding the optical slave sensor. Having it separate from the swivel head allows you to turn the body to face your other “master” flashes.

There is a flip-down diffuser and a white bounce card in the top of the flash head. When you pull out the diffuser, the flash helpfully autozooms to the widest focal length, and returns to your previous setting when you put the diffuser away. I found this incredibly useful when using the JY-680 at an event, as I could switch between a narrow zoom (e.g. 80mm) and 24mm very quickly.

Unfortunately, the diffuser didn’t stand up to being repeatedly pulled out and replaced, and has now broken off. Unlike on Nikon speedlights, when this happens you won’t find yourself trapped at the widest focal length setting. Now I just have to manually zoom the flash in and out instead of using the diffuser as a short-cut. Maybe your JY-680’s diffuser will be made of stronger stuff, or maybe it’s just not designed for intensive on-camera use?

On the right hand side you can access the battery compartment, which accepts four AAs. The polarity of the terminals is clearly marked. The battery door feels OK – neither flimsy nor heavy duty. I’ve never had any trouble with it popping open accidentally or anything like that. 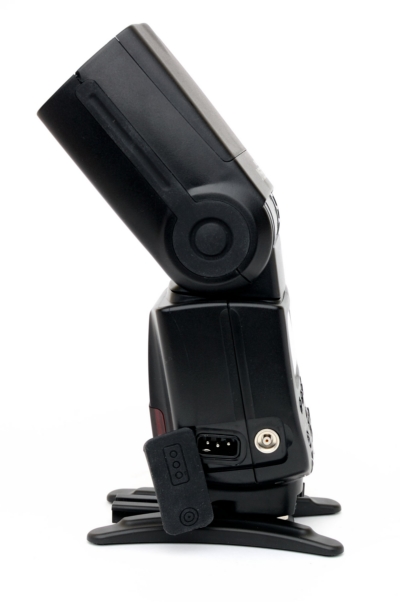 The left hand side of the JY-680 hosts two input ports, covered by a removable rubber flap. There is a Prontor/Compur (PC) jack for synchronising via cables, and there is a Canon CP-E4 type external power socket for high voltage battery packs. The rubber cover is removable so try not to lose it.

When using the JY-680 as an on-camera flash, I found that the cable from my Godox Propac kept coming out of the speedlight’s high voltage socket as I moved about. This is irritating to say the least, but shouldn’t be a problem if you have the flash relatively static on a light stand. Perhaps with other brand cables the fitting will be more snug. If not, this is an issue to be addressed by Viltrox. You can solve it yourself with a bit of gaffer tape!

The Viltrox JY-680 is a good all-round flash that’s easier to use than some popular rivals. It packs a range of useful features making it capable both on and off the camera.Â The output seems to be around as powerful as a Nikon SB-600 or SB-800 but this hasn’t been rigorously tested. For events photography this speedlight is especially well-suited, as changing and viewing power levels is effortless in dim light. I discovered this when thrown in the deep end: my Nikon SB-600 capacitor blew during an event and I needed a quick substitute!

Where the JY-680 is let down is in minor quality issues. While the flash itself is still alive and kicking after many hours of intensive use, the flip-down diffuser has broken off and I’m continually irritated by the high voltage port which doesn’t hold power input cables securely. These are not deal breakers, and not really problems uncommon in other flashes. I’ve actually been using the Viltrox regularly for nightclub work since the untimely death of my SB-600.

Should you buy a Viltrox JY-680? That will depend on price, dealer support and availability. A specific recommended retail price hasn’t been released, but Viltrox suggest it will be similarly priced to the Yongnuo YN-560. If so, the Yongnuo will certainly be well-matched. There are a few Viltrox resellers on eBayÂ and more dealers should appear in future.

Questions? Comments? Let us know in the comments below, on Twitter or on Facebook.Â For more information, please visit theÂ Viltrox web site.