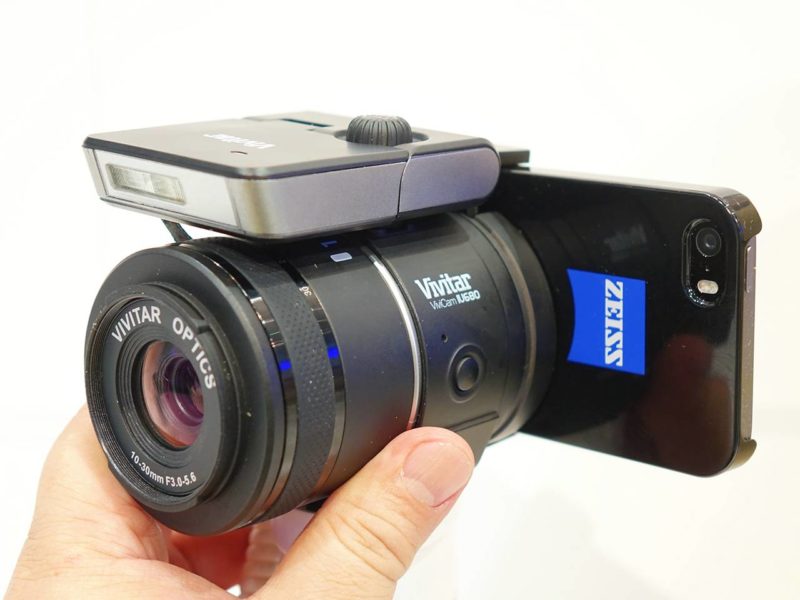 Vivitar (Sakar) managed to sneak through a new camera system at the CES 2014. The ViviCam IU680 is a mobile camera system that connects to a smartphone. It’s a bit like the Sony QX-series and the new Kodak Smart Lenses, but more modular and has a flash.

There’s a lens module, a sensor module (mount unknown) and a flashgun module, so you have everything needed to take pictures, except perhaps something for your hands to hold on to. Calling it “unergonomic” might be generous.

On the other hand, the micro-USB connector â€” used for the removable flash â€” could be a glimpse of things to come. Smaller than a full-sized hotshoe and more universal than a Nikon 1-style proprietary port, it could be the de facto standard for future ultra-mobile flashguns, were such a format to become remotely mainstream (a big ‘if’). Conceivably, external mini-flashes (or triggers) of any brand could connect to the same port as the camera charger.

There is no information yet on the ViviCam’s pricing or availability, nor exactly what lenses will be available. Still, with the Ricoh GXR discontinued and the Sony QX system so far lacking flash, is this a new camera format to watch?