Wansen, a company you most likely haven’t heard of, have brought out a new flash triggering solution that’s all too familiar. Previously we reported the awkward moment when the knock-offs get knocked off, with low margin Chinese manufacturers copying products such as Yongnuo flash triggers, which are also cheap and Chinese.

Not resting on their laurels since their RF-602 clone, Wansen have released another flash trigger, the WS-603, and this one’s a dead ringer for the similarly-named popular Yongnuo RF-603 transceiver.Â According to online sellers, the WS-603 is compatible with the RF-603, but we haven’t gone hands-on so can’t verify this. If true, it might also be compatible with Yongnuo YN560-III flash, and possibly the MeYin RF-604, albeit only on one channel.

The WS-603 is a radio transceiver. You put one on your camera and connect another to your flash unit and it will synchronise them together when you take a photograph. Every individual device can work in either role.

The feature sets of the WS-603 and RF-603 are pretty much identical (100m range, 2.4GHz, etc.) except the Wansen has a locking ring on the hotshoe foot â€” something that Yongnuo has been criticised for leaving out on their RF-603. The Wansen also has a standard 3.5mm port instead of the more archaic Prontor-Compur (PC) sync port found on the Yongnuo. Both brands have 2.5mm jacks and a universal ISO hotshoe, so you should have no trouble finding a way to connect them up to your flashes. 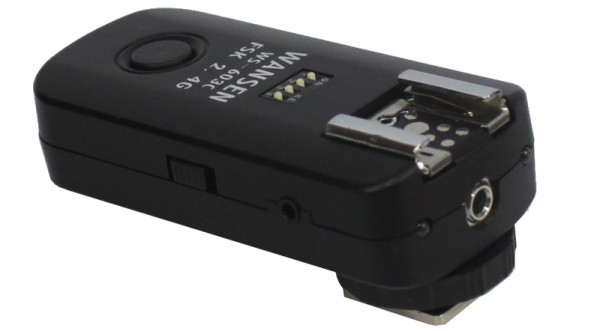 The Wansen WS-603 is already available on eBay for around $20â€“30 (Â£15â€“20) per kit, in Canon and Nikon variants. If you find your Yongnuo RF-603 falling off your camera all the time, then for this price a couple of WS-603 transceivers could well be worth a punt to complement your flash triggering system.

Shenzhen Wansen Photo Tech Co.Â has a pretty low profile, but it appears that they are trying to carve out a niche by making unauthorised copies of their competitor’s products, improving them with minor added features as they go. A good way to attract aÂ lawsuit. Wansen’s offerings range from aÂ trigger with a built-in laserÂ to a double-dutyÂ hotshoe adapter/flash triggerÂ for Sony NEX cameras.

Have you tried this product? Is the company mad? Leave a comment below.