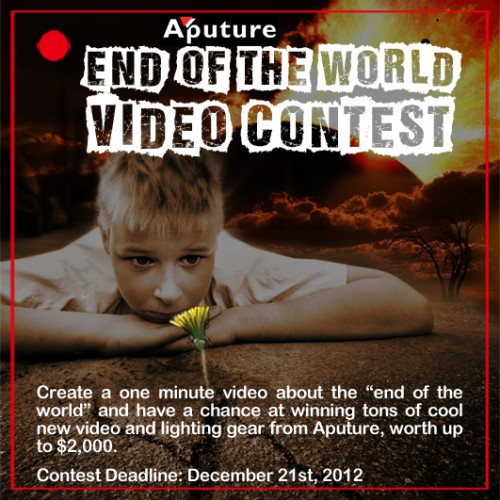 Photographic equipment company Aputure have launched their first film contest, with US$2,000 worth of photo and video gear up for grabs. Anybody can submit their short video clips, under a minute in length and themed “End of the World”.

If the entry is good enough — decided by a popular vote, followed by final selection by Aputure staff — the winner will take home a boatload of Aputure video and stills photography gear, worth $1,000. Second place gets the choice of either half of the first prize: a Vivo Video Pack or a Strobe Lighting System; and the maker of the third place clip will win a V-Remote USB controller.

Videos should be uploaded to YouTube with the tag #aputurevideocontest. The deadline for entries is 21st December 2012. Assuming that the world doesn’t end on that day (spoiler alert: it won’t) voting will continue until New Year’s Eve and the three winners will be announced on New Year’s Day.

More information on the competition, including a list of entries and how to vote, is available at the Aputure company blog.