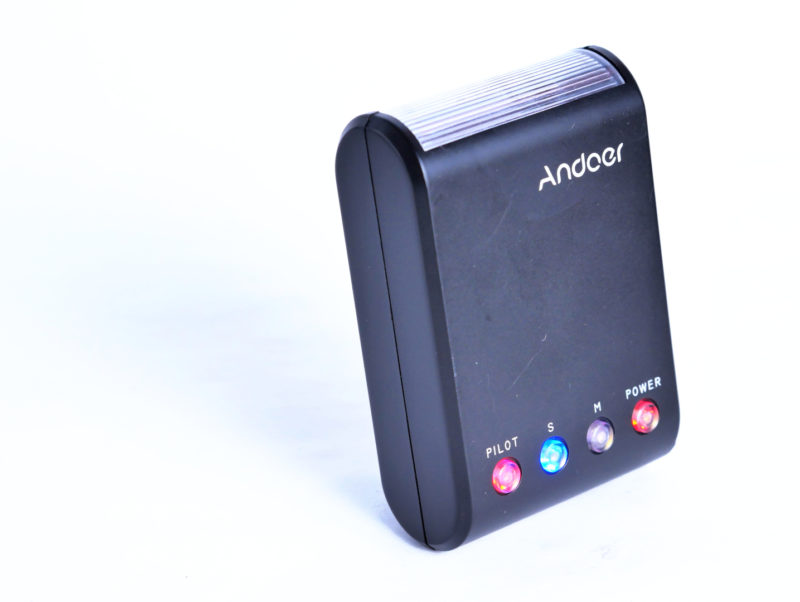 A while ago I got sent a pair of the cheapest flashes that exist on the market today. The product is variously called the Andoer WS-25 or Wansen WS18 and the price is currently set at a minuscule US$11. That’s a far cry from the $1000+ being asked for the latest top-of-the-line speedlights from Canon and Profoto. What could possibly go wrong?

The WS18 / WS-25 is described as a ‘mini slave flash for cameras’, takes two AA batteries and has a claimed guide number of 18, with a recycle time of 3 seconds. There are no output adjustment controls, no zoom, no tilt or swivel, and certainly no through-the-lens (TTL) automatic exposure control. It always fires at full power.

In the hand, the flash feels cheap, though not actually flimsyÂ per se. It’s all plastic, of course, including the hotshoe foot. The only thing that’s noticeably poor quality is the battery door, which isn’t secure and slides out of place very easily. 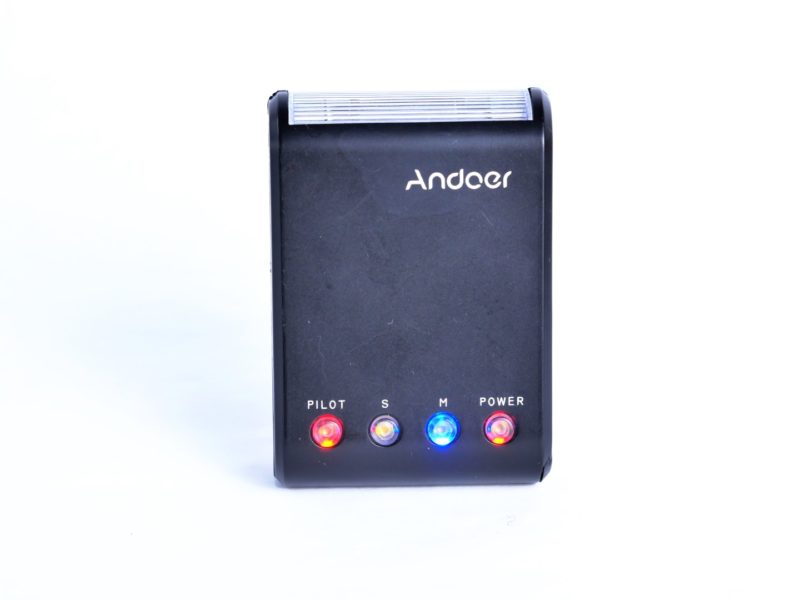 The S and M buttons switch between ‘slave’ (i.e. triggered via optical sensor) and ‘manual’ (i.e. fired via the hotshoe) modes. They light up blue according to which mode you are in. The power button glows red to show the flash is switched on, and the pilot button lights up red when the capacitors are charged and it is ready to fire. The buttons are hard plastic and actually have a pretty good clicky tactile response. 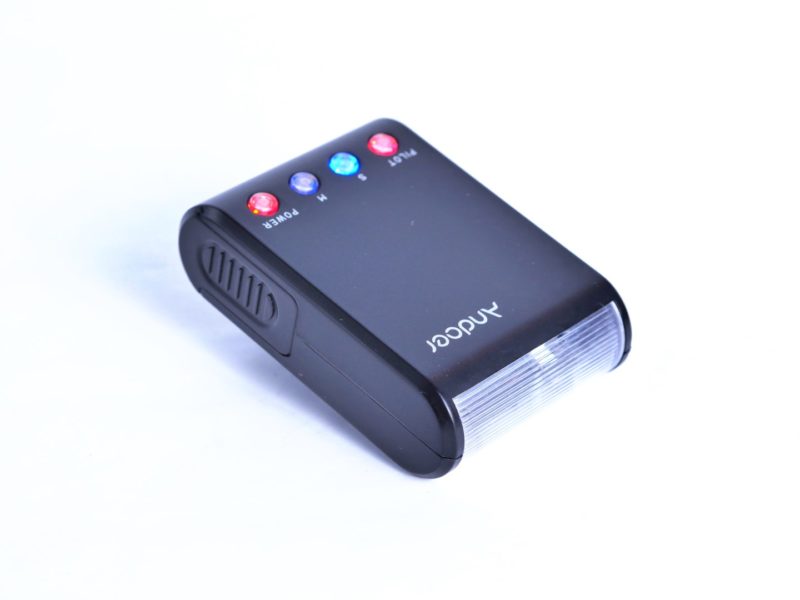 You cannot fire the flash until the pilot light is illuminated, but that does not mean it is fully recycled. In other words, you can fire before the flash is actually ready, for faster response but reduced output. It would take a skilled photographer to time this feature well enough to use it as an effective means of power control, however. There is no ready beep. In my testing, using NiMH AA batteries it took 7 seconds (rather than 3) to recycle completely, which is very slow. 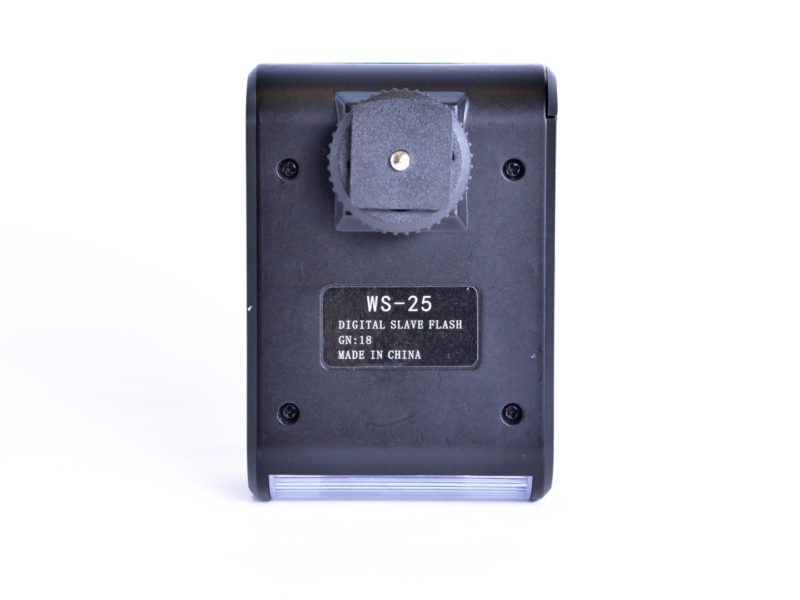 How bright is it? The claimed guide number (GN) is 18 (in metres, I assume, but Iso unspecified) for both the Wansen WS18 and Andoer AD-25 branded versions. Using a Sekonic L-358 light meter, I measured f/6.3 at a distance of one metre (Iso-200, 1/250 second). Given enough time to recycle fully (see above), output is reasonably consistent, within 1/3 stop from shot to shot and the same between units.

Though it has a hotshoe mount, if you’re really looking for an on-camera flash that’s more than just a prop then I think you’d probably be better off with the Changyin CY-20, a similarly priced flash that can tilt. Or get the MeiKe MK320, which costs a bit more but has tilt, swivel, TTL, manual power adjustment and even an LED modelling lamp, while being a similar size. It’s almost certainly a false economy to choose the WS18/WS-25 as an on-camera flash as a cost-saving measure.

Where a mini slave flash makes most sense is as a spare light for multi-light setups, when you want the option of a background light, or possibly a ‘practical’ light (hiding the flash inside a lampshade, for instance) without worrying about having wasted moneyâ€”or space in your camera bagâ€”if you end up not using it.

This would be reasonable, if not for the fact that the optical slave in this ‘mini slave flash’ is terrible and barely works due to a fatal design flaw. The eye cell is inside the flash, behind the fresnel. This means that the WS18 will only detect a ‘master’ flash going off if it is pointing directly at the master. And even then, it’s not very sensitiveâ€”adding a scrim in front of the master flash diffused and reduced its brightness enough that a slave WS18 could no longer detect it.

For simple one-light product photography setups, it does the trick. All the photos in this review were shot using an Andoer WS-25, triggered by Aodelan RM Mini, fired through a diffuser panel. But if you want to add a second WS18/WS-25, you need an extra radio receiver, which is a false economy.

All in all, the Wansen WS18 is a mini slave flash that is mini in size and mini in output. The slave is not sensitive enough and the flash is slow, weak, and non-adjustable. It does a poor job, on-camera and off.

Should you buy one of these? You probably saw this coming, but it turns out that the cheapest flash on the market isn’t very good. At Â£10, it may even be overpriced. Some experienced photographers out there might find this flash offers just what they need for specific situations. But most people should look elsewhere.

The Wansen WS-18 (Andoer WS-25) is available from eBay, AliExpress and other sellersÂ for about Â£10. Thanks to TomTop for sending me these to review. If you want something a bit more versatile, then a little bit more money gets you a MeiKe MK320 (if you need something small) or a Godox TT560 II (if you need a cheap all-rounder with built-in radio). If you want the most light for the least money, the Godox Witstro AD200 is over 100 times brighter than the WS18, yet only 30 times the priceâ€”making it three times better value.

What’s your recommendation for a budget flash? Let me know in the comments.