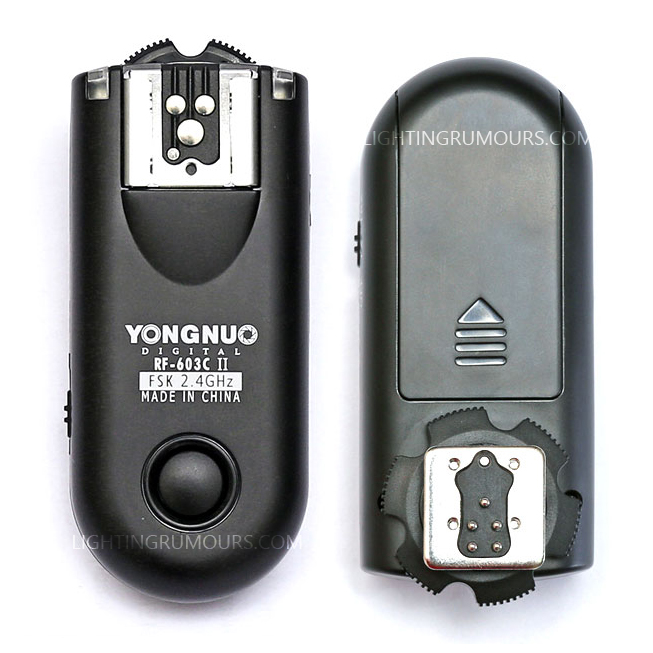 Like the RF-603, each unit is able to switch between acting as either a transmitter or receiver â€” there are no dedicated master or slave units. However the RF-603 II adds a toggle on the side with three positions: Off, TRX and TX. In TRX mode, which is said to have an “improved self-detecting system”, it will automatically switch between transmitter (TX) and receiver (RX) modes based on the conditions in which it is being used. In TX mode it only transmits signals, which is useful for testing and to save power.

Operating on the 2.4GHz frequency band, the trigger can be used over ranges as long as 100 metres. There are 16 channels, the Dip switches for which are found inside the battery compartment as before. The unit takes two AAA batteries.

One of the main criticisms of the RF-603 was its insecure mounting. For some cameras it would sit happily in the hotshoe but in others it was perpetually at risk of sliding out, especially if a flashgun were mounted on top of the transceiver. Yongnuo have addressed this by adding both a friction tightening wheel and a locking pin, which should ensure the device stays put wherever you mount it.

Yongnuo has also increased the sync speed since the previous generation, raising it to 1/250â€“1/320 second, compared to the 1/200 or slower experienced by users of the original RF-603.

Though an all-manual trigger, there will be two models, the RF-603C II and RF-603N II, to support flash wake-up for Canon and Nikon respectively. TTL is not supported and there is no indication of cross-compatibility with the Yongnuo YN-622 series, nor support for sync speeds above X-sync with most cameras. However, the RF-603 IIÂ should be backwards-compatible with the RF-603, as well as able to trigger the radio-enabled YN560-III flashgun.

Early listings have the Yongnuo RF-603 II at $34.99 for a two-transceiver kit on eBayÂ or $43.99 on Amazon.com. You can also now buy the RF-603 II from Yongnuo’s official storeÂ for $36.99 with a 12-month warranty. For more information and images, visit the manufacturer’s product page.