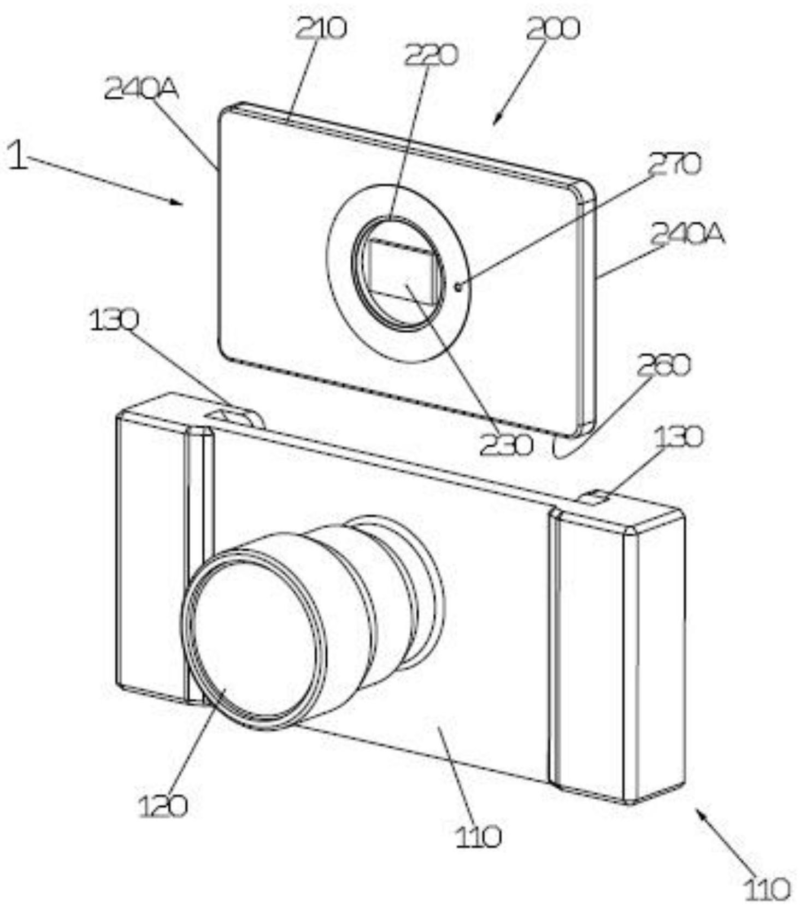 The Chinese photographic accessory manufacturer Yongnuo is developing another mobile camera. The companyâ€”originally known for its flashes and triggers, latterly for camera lensesâ€”recently introduced the YN450M, an Android-based mirrorless camera with a Micro Four Thirds lens mount. A newly published patent suggests that Yongnuo’s camera ambitions don’t end there.

According to the patent, the future camera is not simply a conventional body with interchangeable lenses that attach via a bayonet mount. Instead, it splits into two parts: a removable ‘mobile terminal’ comprising a specialised smartphone containing a bare image sensor and a touchscreen, all of which slides into an ‘external lens assembly’ holding the lens, hand grip and some form of locking mechanism. 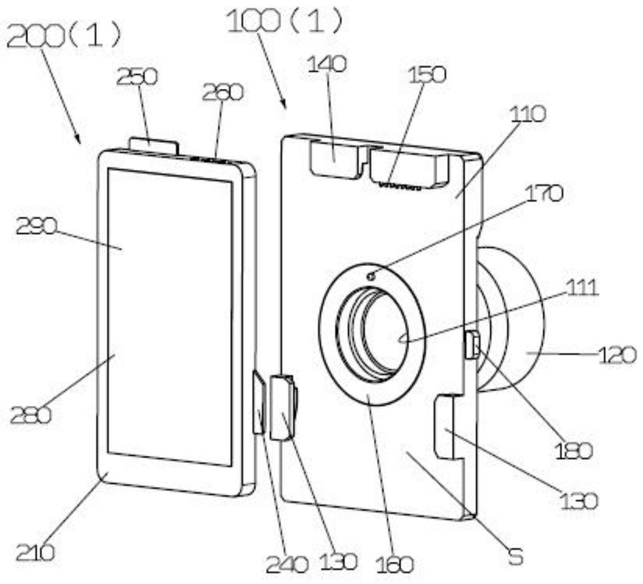 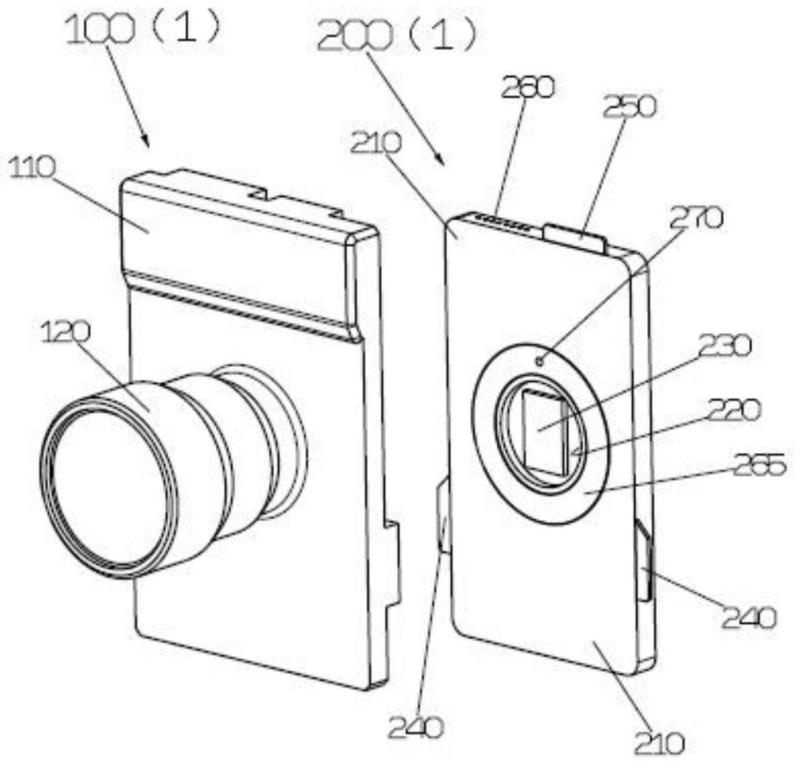 This differs from the YN450M and other Android-based system cameras (such as the Samsung Galaxy NX) in that the hand grip is part of the lens, rather than part of the ‘phone’. The sliding interface vaguely resembles the Rixoh GXR system, but the sensor and lens are separate. And unlike existing smartphone ‘lens camera’ solutions such as the DxO One, Olympus Air, Sony QX and Kodak Pixpro SL series, you can’t just use a normal phone: it looks like you’ll have to use a special Yongnuo-designed phone with an exposed image sensor. (The patent makes clear the presence of an opening around the sensor, labelled 111 and 220 in the figures.)

That being the case, there will probably be a non-lens assembly to act as a body cap, when you just want to use the device as a phone or internet device without a bulky lens attached. However, unless the lens assembly can itself separate from the lens, the selection of optics might be limited. The images show a retractable zoom lens, but the patent suggests the possibility of prime lenses with both manual and autofocus as well, possibly with built-in image stabilisation.Â

If the plan is for the manufacturer to launch a whole new standard (rather than simply a one-off gadget) then it’s certainly one way to bridge the gap between the versatility of a smartphone and the image quality of an interchangeable-lens system camera. 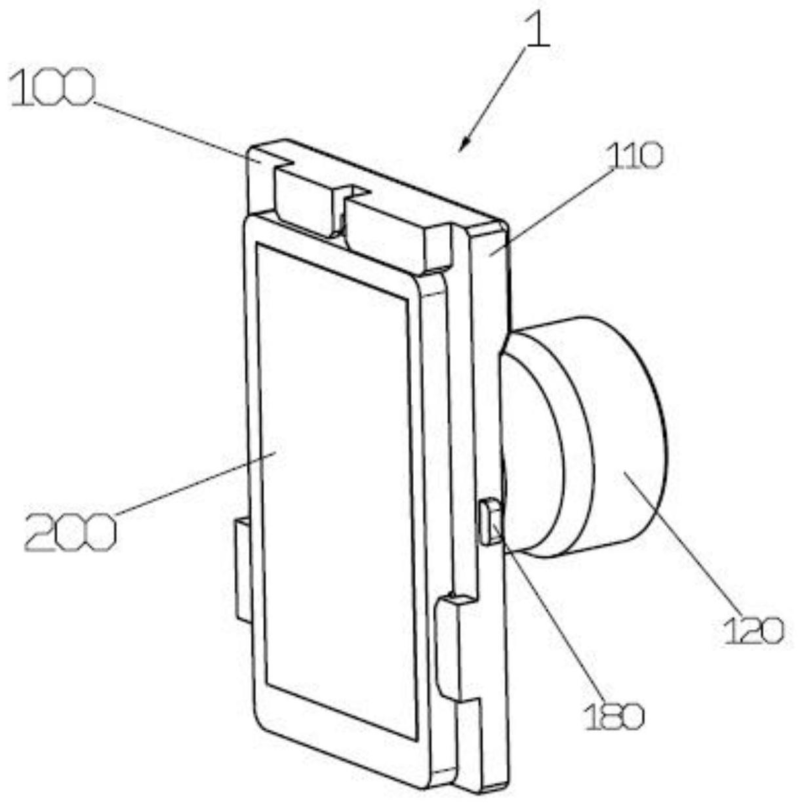 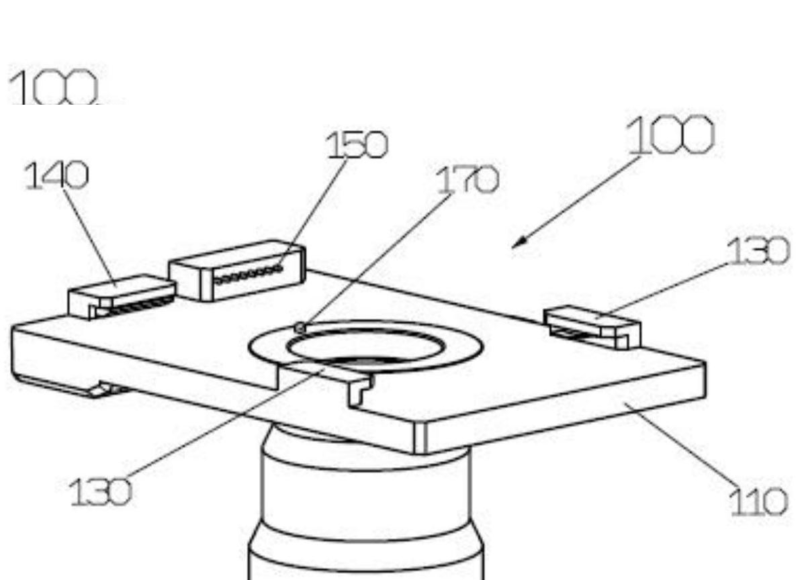 The credited inventors are Xu Jianwei, Xhuang Yongsheng and Zhuang Jiannan. The patent application was filed by Shenzhen Yongnuo Photographic Equipment Co., Ltd. in April this year, and published last month. The gist of the patent is as follows. I have reworded it here for better readability.

Nowadays, mobile terminals such as smartphones have a photographing function. Time has shown that the lenses of these mobile devices cannot meet the needs of demanding users. As a result, external smartphone lens modules have appeared on the market.

However, these external lenses are often impractical because they are insecurely clamped to the mobile device and can easily become detached. The interface between the external lens and the device is also imprecise, due to the nature of the clamping mechanisms used, resulting in inferior image quality. Alternative lens attachment solutions exist, but are tricky to install and inconvenient to use.

To overcome these limitations, the present invention provides an external lens assembly, mobile terminal and photographing apparatus that are convenient to use and fit together precisely.

The document goes on to describe various arrangements of grooves, clamps and locking mechanisms that allow the components to mesh with one another securely.

Just because they patented it, doesn’t mean Yongnuo will manufacture or sell it, of course. The much-publicised Yongnuo YN450M still isn’t available for general sale and seems to only be in the hands of influencers at the moment.

What do you think of this concept? Share your thoughts in the comments.