The Speedlite YN460, Yongnuo’s first manual flashgun, has been updated and improved without any official announcement from the manufacturer. The latest version â€” priced the same with no change in model number â€” adds a PC sync port, a different battery compartment, new buttons and a noticeably faster recycle time.

Gabriel Izumi, a Brazilian photographer, discovered the changes when he recently bought a new YN460 from a Hong Kong-based eBay seller. Compared to an older YN460, which he also owns, he said:

“They look the same, but the new 460 has black buttons, PC Sync input, a different battery compartment and the recycle time is incredibly faster! Something about 2 seconds at full power. I tested it using 2700mAh batteries.”

The update seem to address common customer complaints about the product, including “squishy” buttons, a flimsy battery door and the lack of a sync port. It could make some customers think again about buying the more expensive flashguns such as the Yongnuo YN560 to get these features. Izumi provided some photographs showing the differences, reproduced below with permission. 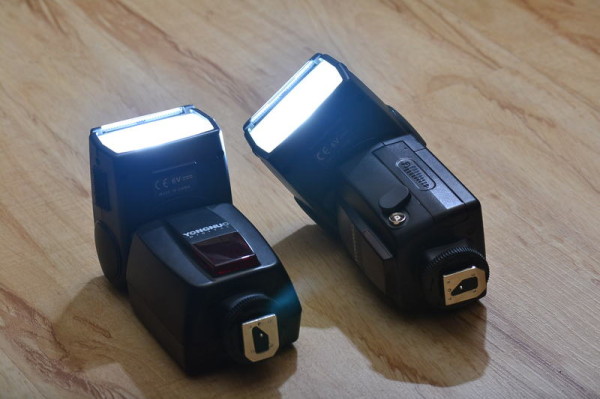 Notwithstanding the significant changes to the product, no announcement has been made on the Yongnuo company web site or in the listings at their official eBay store.

This is not the first time the Yongnuo YN460 has received an update. The very first YN460 units had plastic hotshoe feet, later replaced by stronger metal ones (which can be retrofitted) without any hike in price.

Despite the improvements, it does look like the Chinese manufacturer is going to do an Apple-style rebrand of its lower-end products and rename them “The New YN460 With Retina Burnout” or something similar. The Yongnuo YN460-II, for example, is still distinct, being more powerful and offering more precise power control.

. Have you got one of the newer versions? Where did you get it? Let us know in the comments below.