Following the release of their TTL YN-565EX and manual YN-560 II speedlights, Shenzhen-based Yongnuo have announced a hotshoe flashgun with features somewhere in between the two. The Yongnuo Speedlight EX600 is an off-camera TTL flash that is, like the YN-565EX, simultaneously compatible with Nikon and Canon’s advanced infrared wireless systems. 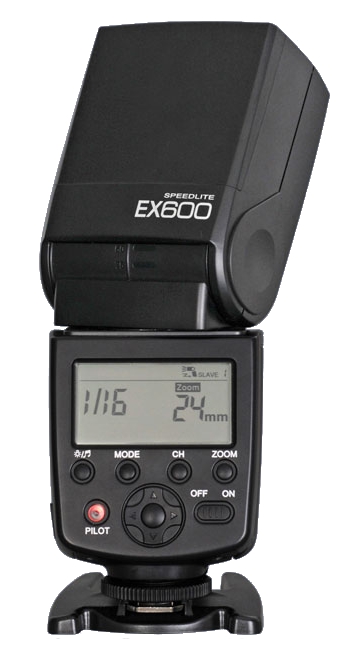 Unlike most slave flashes of this kind, however, the Yongnuo EX600 can’t be used in TTL mode on your camera hotshoe. This is because there is only a single electronic contact on the speedlight’s foot, effectively making it a universal manual flash. Only when under the influence of a Canon ST-E2, Nikon SU-800, Yongnuo ST-E2 or high-end speedlight in master mode are the TTL capabilities revealed. Similar to the Oloong SP-660 II, this means the product is compatible with both Nikon Commanders and Canon Transmitters and otherwise works universally in manual mode.

Despite the model number, the EX600 has no relation to Canon’s Speedlite 600EX. I’m sure the similarity in name is purely coincidental. Probably. You also won’t see any built-in radio functions such as found in the Canon 600EX-RTÂ – try the Yongnuo YN460-TX/RX for that. The body of the EX600 appears smaller than and a different shape to the YN-56X series.

As the YN-565EX has a TTL hotshoe foot, there are two different models – one with a Nikon and one with a Canon interface. The EX600 has only one model – with universal contacts – which should hopefully make it cheaper.

Speaking of hot shoes, Yongnuo now sell spare hotshoe feet for YN flashes. This will allow users to replace a broken base – or an old plastic one – with a stronger new metal one without having to purchase a whole new unit.

Other features of the EX600 include:

At the time of writing, the price and release date are yet to be announced. For more information on the Yongnuo EX600, visit the manufacturer’s product page or the official Yongnuo store. Click here to search for eBay listings.