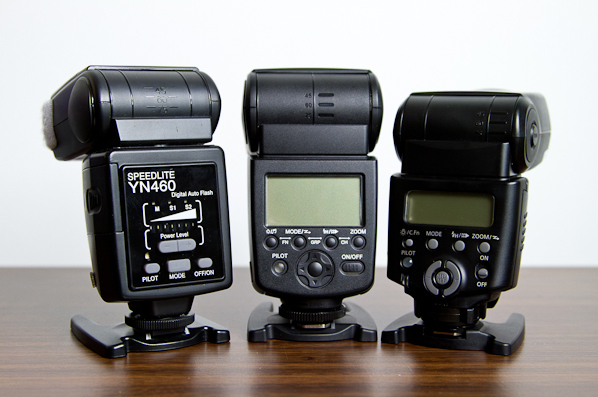 Yongnuo, the Chinese photography accessory manufacturer, has certainly come a long way since the days of YN460 speedlite and the original RF-602 wireless triggers. These days they are producing some high end gear, some of which actually puts the major players to shame.

Take their flagship YN568EX speedlight (provided for this review by LovinPix.com); it has many features of the likes of the Nikon SB800 and Canon 580EX but at a fraction of the cost, and all this without cutting on the build quality. Sure, there are reports that while the build quality is top drawer, the actual components used on the inside are still somewhat substandard. I guess at the price something would have to give!

Scroll down for the video review.

I have to say that I own one of the original Yongnuo YN460 speedlights and Iâ€™ll be honest: itâ€™s a box of inconsistent shite, however it was really cheap and I did use it to learn all this off-camera flash stuff.

This is the first time Iâ€™ve used any third-party speedlites after I moved from the YN460 to Canonâ€™s own units, the 430EX and 430EX II. The reason for not using third-party stuff is simply that I wanted 100% reliability and the Canon speedlites offer just that: they have never ever failed me.

So what are my thoughts on the YN568EX? Well, I am mightily impressed: the YN568EX is a million miles away from that YN460 in every aspect, build, features, consistent output and recycle times. To me this shows that Yongnuo do kind of listen to the photography community, taking on board whatâ€™s been suggested and acting on that. For sure, there are some things that are missing, such as an external power hook up, and Iâ€™d rather had seen a 3.5mm jack over the 2.5mm one, but thatâ€™s a minor issue.

Below Iâ€™ll summarise my thoughts.

The build of the YN568EX is excellent, it feels heavy and solid. The plastic feels good, not too thin. The LCD clear and easy to read, the orange backlight is bright and pretty even in its illumination. The control buttons are of a solid plastic and have a good positive action with a click to confirm they have been pressed. The directional dial is a four way type, left right up down, it does have a central button but that doesnâ€™t appear to do anything.

The head is about the same size of the Canon 580EX and can swivel 180Â° in both directions. One thingÂ I’mÂ not sure on is the head’s mechanism, itâ€™s some sort of ratchet thing that I think over time could become loose. Thereâ€™s a 14mm wide angle diffusion panel along with a pop out reflector card.

The battery door feels nice: itâ€™s spring loaded so pops open when you release it. Talking of the release it opens and closes by sliding the door, locks with a solid feel. This thingÂ shouldn’tÂ just open by itself.

The hotshoe locking ring is a simple nut just like a thousand otherâ€™s out there, nothing fancy or clever (see the 430EXii) It can be a bit fiddly to tighten on something like the YN622C trigger, but itâ€™s nothing major.

For the price this speedlite is packed with features and what is a world FIRST! You can control this flash by either a Canon or Nikon camera. Yes, you read that right. In slave mode you can control the flash by using Canon wireless system or Nikon CLS/AWL. This is a huge development. While my test unit is a Canon variant, meaning itâ€™ll work on Canon cameras, the ability to use, say, a Nikon D800 and Speedlight SB-900 (as master) to control this flash is pretty darn clever.

Side note: If you have this flash and are a Nikon shooter can you leave a comment below on how well the i-TTL system works?

The speedlite has the usual stuff: full manual control, a 24â€“105mm zoom head, High Speed Sync (HSS), Second Curtain Sync and Multi Flash. The latter is the stroboscopic effect, firing multiple pops in various combinations of frequency and count. This is one featureÂ I’mÂ keen to try, having never done it before.

While in manual mode you have full control of the flash. The power adjustment has a nice feature: if you press the control dial left/right the power goes up in stops 1/1Â â†’Â 1/2Â â†’Â 1/4 … you get the idea. But if you want finer control then you just need to press up/down to give you third stops. One thing I was surprised to see was what appeared to be a half stop between 0.3 and 0.7. On something like the 430EX II the third stops work like this:

This indicates a half stop, which is nice. While Iâ€™m on the subject of the power adjustment, you have to be careful if adjusting it blind, as if you go too far the power will just cycle round and round. So itâ€™s easy to go from 1/1 to 1/128 without knowing.

To test the YN568EX I used a Canon 7D, Cactus V5s, Phottix Strato IIs and a set of YN622C Triggers (more on those later).

For the first test I simply put the flash on top of the 7D, the camera recognised the flash and I had full control via the 7Dâ€™s menu system.I could access E-TTL, Manual, Multi, HSS, Second Curtain Sync: all the features youâ€™d expect. However, there is a big omission, as the YN568EX cannot be used as a master flash, you cannot use it to control other flash like you can with the 580EX. bit of a shame but no big issue for me.

The next test was to get the unit off the camera, so I attached a Cactus V5 trigger and put it on a stand. Needless to say it worked flawlessly, fired every time which isnâ€™t surprising as the V5s are just dumb â€˜Fire nowâ€™ triggers.

Next up was the Phottix Strato II. I was keen to see if the E-TTL pass through would work on the transmitter. Well, again it does without skipping a beat. And the wireless worked like a charm.

Then I tested the YN568EX with the Yongnuo YN622C E-TTL Wireless Triggers. I had big hopes for this combination â€” technically they should be 100% compatible with each other. I wasnâ€™t disappointed: the YN622C just worked, 100% accurate, changes made via the 7D flash control menu appeared instantly on the flash with no noticeable delay. E-TTL worked as well as E-TTL does (Iâ€™m no fan of ETTâ€™helâ€™L!)

Finally I tested the built-in wireless control. I put the flash in Sc mode, popped the 7Dâ€™s flash up and went to the flash control menu. Again everything was where it should be HSS and Second Curtain all worked as youâ€™d expect. The flash can be set to one of four groups and four channels. To change the group you press and hold the HSS/SCS button and then press either the zoom button for channels or the Mode button for Groups. One thing I did notice: the red LED on the front was out of sync with that of the 430EX II and 430EX, normally when all the flashes are in the same group the LEDs will sync, but the YN568EX didnâ€™t. This didnâ€™t seem to affect its functionality in any way.

Iâ€™d have loved to try it with the Nikon CLS (AWL) but I donâ€™t have ready access to any Nikon gear so couldnâ€™t test it.

Next up was to see what the I.R. focus assist beam was like. So with the flash back on the 7D and the beam turned on I gave it a try in a dark room. While the beam is a little off centre it did work and in fact itâ€™s the same beam you get in the YN622C triggers. Is it as good as Canonâ€™s? Not on this planet, but it isnâ€™t a bag of crap either.

The final test â€” and one of the biggest â€” was to see how consistent the power output was across multiple power settings. You see flash power consistency has always been an issue with cheap third party speedlites. The YN460 was truly awful but itâ€™s been a few years since the YN460 came out and if the rest of the flash is anything to go by the output should have vastly improved.

This wasnâ€™t by any means a scientific test but was just a simple test to see if the output was consistent.

The setup: YN568EX in Manual mode, 35mm Zoom and around 10 ft away from a Sekonic L-358 light meter. Flash was triggered using the Phottix Strato II.

I fired the flash five times for each power setting and itÂ didn’tÂ fluctuate in its output. Very pleased to see this.

I am very very impressed with the Yongnuo YN568EX. The build quality and feature set are excellent, even more so when you consider its price. Sure, there are some flaws but I have to give due credit to Yongnuo for the work theyâ€™ve put it on this; they have moved up in the world from those YN460 days. Yongnuo are starting to give the big guns a run for their money.

Iâ€™d have no trouble recommending this speedlite as either an extra unit to your kit or as perhaps your first speedlite.

The sample on test was kindly provided by Lovinpix, Yongnuo’s French distributor, who sell to all over the world. (Currently their web site is only written in French, but you can use Google Translate). No prior agreements were made with the dealer to affect the outcome of this review. Visit their web site at Lovinpix.com, where they list the Yongnuo YN568EX for â‚¬169.

The YN568EX is also available on Amazon UK

Mark Boadey is a portrait photographer based in Prescot, near Liverpool in England. He runs the New To PhotoÂ web site, “Your guide to learning photography”. See Mark’s portrait work atÂ markboadey.com.