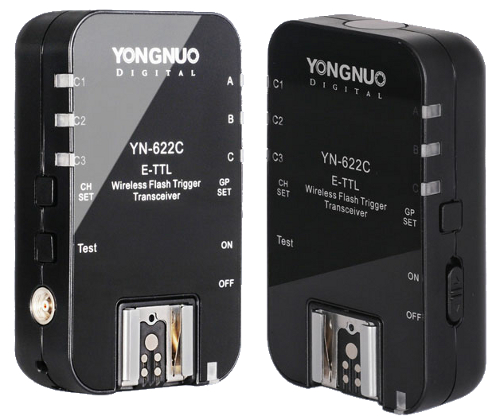 The Chinese manufacturer Yongnuo – who are best known for their YN-series speedlights and RF-series radio remotes – have just unveiled a wireless flash trigger supporting Canon E-TTL. The new product bears resemblance to the King E-TTL Trigger from rival company Pixel Enterprise, but has one or two notable differences.

The last venture into radio TTL by the Yongnuo company was the self-contained YN460-TX/RX system (a third party 600EX-RT ahead of its time?), slated by critics for its mismatched high price and low quality. The YN-622 takes a different approach.

Used with a compatible Canon EOS DSLR and EX II-series Canon or Yongnuo Speedlite(s), the YN-622C will allow you to keep your flashgun in E-TTL mode at long distances from the camera without the need for line of sight. If you prefer manual mode, you can set the precise power level and zoom of your remote flash from the back of your camera. The YN-622 also supports Multi (stroboscopic) mode. These adjustments are made possible by Canon’s Flash Control menu.

High Speed Sync (HSS) up to 1/8000 second is supported, as is Second Curtain Sync. Ultra speed sync is possibleÂ with manual studio flashes via the Prontor/Compur (PC) sync output port. You can’t use the YN-622 as a remote shutter release.

The YN-622 has seven different frequency channels and seven combinations of wireless flash groups (A, B and C). It runs on the 2.4GHz band but it’s not clear at this stage whether it’ll be compatible with previous Yongnuo triggers such as the RF-603. The operating range is 100 metres. The device takes two AA batteries. 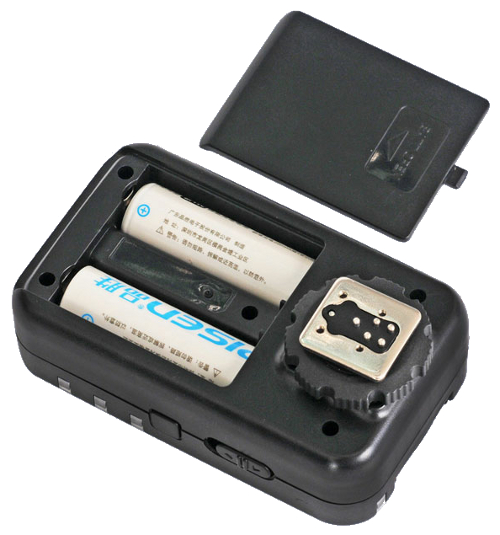 While very similar in many ways to the Pixel King, the Yongnuo YN-622 differs as any unit can be a transmitter or receiver, instead of having to buy dedicated devices for each operation. 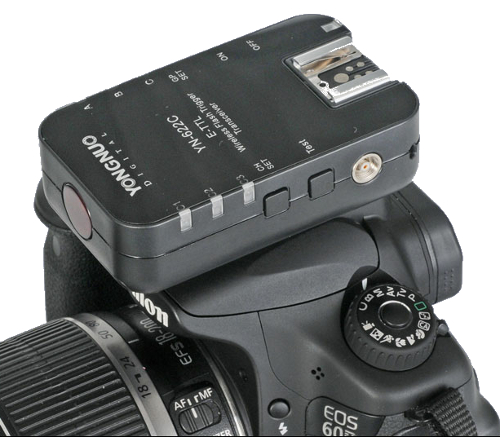 Apart from the transceiver format, it’s unclear – on paper – what benefits the YN-622C offers over the Pixel King.

The catalogue listing mentions support for “E-TTL group ratio (ALL/A:B/A:B C)” and “Manual/Multi Group (ALL/A:B/A:B:C)”, suggesting that multiple remote flashes could be independent from each other with distinct settings. The Kings can’t do this, but there’s a chance that it’s an error in the Yongnuo listing and the YN-622s can’t either. 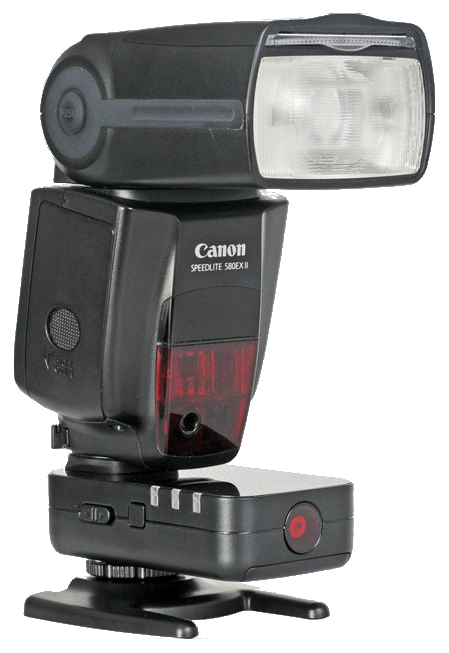 The Yongnuo YN-622C will be fully compatible with the Canon Speedlite 580EX II, 430EX II, 600EX, Yongnuo YN-565EXÂ and any EOS DSLR with in-camera Flash Control menus. The transceivers will also work with other cameras and flashes but with limited abilities. The Yongnuo EX600 will not work in TTL mode with these triggers since the flash has a single-contact foot.Â TTL pass-through functionality is mentioned in the product listing so you should be able to have a flash on-camera while using the triggers.

If we assume the product images shown are of the final retail models, Yongnuo are likely to be criticised for not including a mini-USB port. Without it, there is no way for end-users to update the firmware. The Pixel King has a mini-USB port for firmware updates and external power.

At this stage we don’t know when the YN-622C will be released or the price range. No mention has been made of a YN-622N for Nikon i-TTL, but if one is released then it’ll have much less functionality since Nikon cameras don’t have Flash Control menus.

Yongnuo products are sold from their official eBay store with a 12 month manufacturer warranty. The competing Pixel King sells online at around US$140 for a set, available for Canon, Nikon or Sony systems.

Thanks to Juan Sanchez Castillo for the tip!