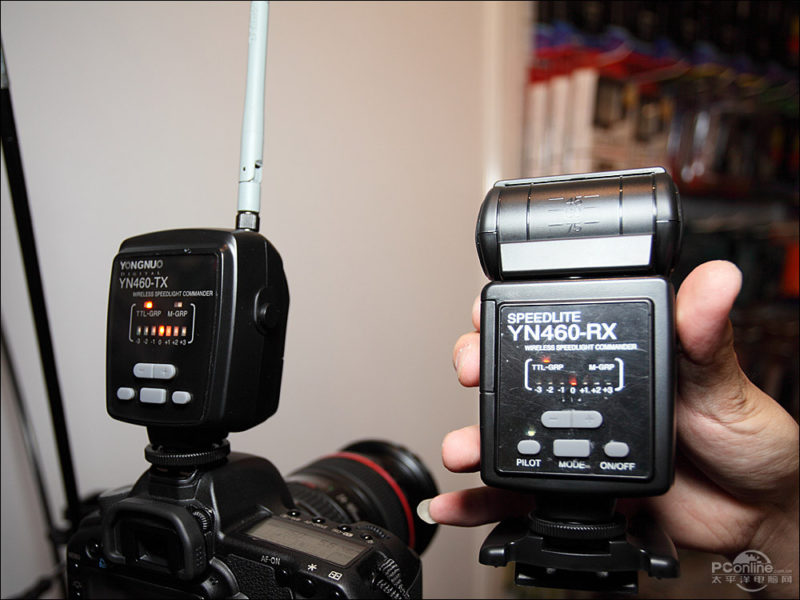 Manufacturer Yongnuo have shown off a range of interesting photographic lighting products at a trade show in Beijing last week. In addition to the YN-560 manual flashgun, there are also some gadgets which have appeared for the first time. The Yongnuo YN460-TX, YN460-RX and ST-E2 appear to be the companyâ€™s biggest step in wireless technology since the 2.4GHz RF-602 flash triggers.

Note: Some forum users are claiming the images are in fact not real but photoshopped. We disagree.

YN-460RX. Especially the following figure cited in the 2.4G flash flash device (the transmitter) YN-460TX, and built-in receiver outside the flash YN-460RX.
YN460TX One can see the transmitter YN460TX big 2.4G antenna, there is a red light in front of the focus assist lamp. 2.4G Suits flash YN-460RX, feature naturally built-in 2.4G receiver. The most pleasant surprise is that even this combination can also support TTL flash! In addition, the transmitter and the receiver can be purchased separately. “

The YN460-TX is based on the casing of the Nikon SU-800, while the YN460-RX looks just like a classic Yongnuo YN460. The big Wi-Fi aerial on the TX is for the 2.4GHz signal. There is no obvious channel selector so itâ€™s unclear how exactly the groups work and how many you can have. The red plastic on the YN460-TX may cover an autofocus assist lamp according to the description (above).

Both sets of photographs show the YN460-TX on a Canon EOS 5D, suggesting the first production models will be for Canon E-TTL II before a Nikon iTTL version (if any). Yongnuo now mix both Nikon and Canon names of speedlight and speedlite on the YN460-RX, so no real clues can be gleaned from the spelling.

The Yongnuo ST-E2 looks identical to the Canon ST-E2. It was mounted on a tripod rather than a camera at the trade show, which may or may not be significant.