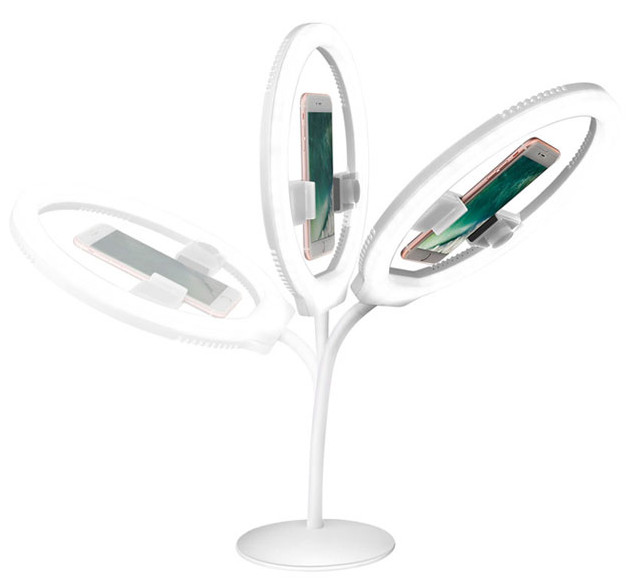 Yongnuo, the Chinese photographic accessory manufacturer, were kind enough to send me a copy of one of their latest ring lights, the YN128.

Officially tagged a “Beautify LED Light”, the Yongnuo YN128 is a bi-colour ring light aimed at a particular demographic: namely livestreamers, beauty bloggers, YouTubers and selfie lovers. It is designed to help people (not necessarily ‘photographers’) take better self-portraits and videos with their smartphones.

It can also be used as a general-purpose soft light for photography and video.

What struck me straight away about the Yongnuo YN128 is how light it is. Admittedly, as a ring light (and being composed of atomsâ€¦) it is mostly empty space, but it is also fairly slim, made of lightweight plastic and not burdened by a bulky power supply or heavy battery pack. 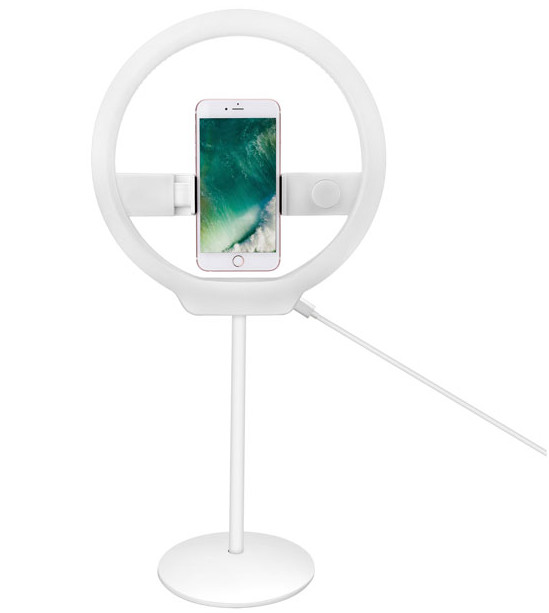 The YN128 comprises 128 surface-mount LEDsâ€”half orange and half whiteâ€”behind a frosted diffuser panel. In the middle of the 28cm-diameter ring is a spring-loaded clamp to hold a cameraphone and on the bottom is a tripod mount.

It is not a heavy duty device, but then it isn’t heavy, either. LEDs are reasonably robust. So you can shove this in your bag and throw it around a bit, without the need for a padded case, on the basis that it’s light enough that it should bounce back from most impacts. This is good, because no case is included in the box.

The YN128 comes with a flexible mounting arm with a 1/4″-20 male thread on both ends, which fixes to a weighted base for positioning on a table top. The arm is easily strong enough to take the weight of the YN128, at any angle, without any risk of the base tipping over.

Also in the box: a coldshoe-foot-to-1/4″ adapter, so you can mount the LED in your camera hotshoe, or on a light stand. I wish the flexible arm had a female thread at one end and a male at the other, so then you could mount it on a light stand or tripod without a spigot adapter (though these are easy to obtain). 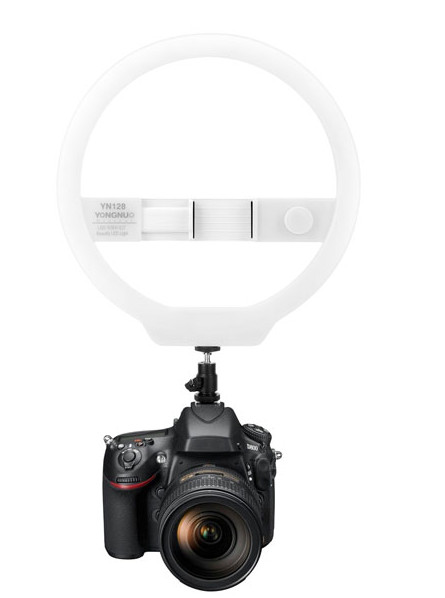 So how do you power this thing? As mentioned, there is no battery pack, ballast or AC adapter. In fact, it runs off a 5V micro-USB port on the side. Connect it to your computer, phone charger or battery bank. A long-ish USB-A to micro-USB cable comes in the box, but no AC adapter or battery, so you’ll need to bring your own.

Once plugged in (I alternated between using a USB port on my computer and a small power bank) you click the little adjustment dial on the YN128 to turn it on and spin the wheel to increase or decrease the power. Click it again to switch into colour temperature adjustment mode (and back again) and hold down the button to turn the light off.

Notice that this power/colour wheel is on the front of the lamp, not the back: you are very much expected to be the star of the show!

The phone clamp does a good job of holding my 5.2-inch Honor 8 smartphone in place, with no worries about it falling out. The design of the clamp means you really need to be using the front-facing camera, because if you mount your phone the other way and view from the other side, then the screen will be mostly obscured by the bracket.

I am not sure I like the slightly inflexible way that Yongnuo has designed this clamp. First and foremost: it cannot be removed, which makes it difficult to use as a ring light for a “regular” camera because the bracket stops you poking the lens directly through the middle of the ring. Even if you want to use it as a ring light for a smartphone while shooting someone else, using the (usually) superior rear-facing camera on your handset, the bracket covers your phone’s display. 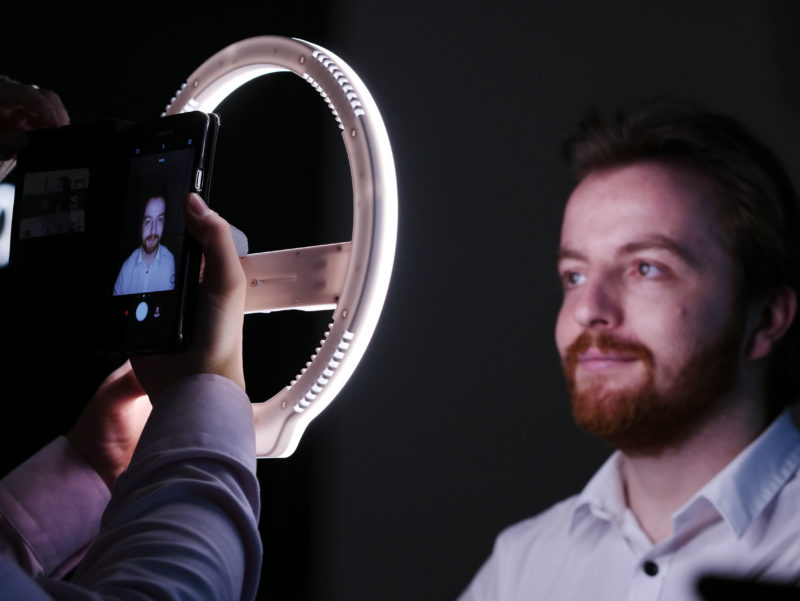 But suppose you do only use this as a selfie light, for live streaming and so on with a front-facing camera. Then the camera isn’t actually mounted in the exact middle of the ring, which might make your subjects look like they are lit more from the bottom than the top. In practice, I am not sure if this actually makes that much difference.

This isn’t the only LED ring light with a phone holder, though, and I think I prefer the design of other ones on the market, where the holder can be swapped out for a mirror (for doing hair and makeup) or removed entirely for use as a regular ring light for photography and video. Then again, those products, such as the Yidoblo FD-480 II, cost $200: four times as much as the YN128; so it’s probably not a fair comparison.

If using a battery pack to power this light then the only issue is figuring out where to put the battery. If using the tabletop stand then you can just rest it on the table, but if using a light stand then you don’t really want to be hanging objects by their USB ports. You’re left to your own devices here: come up with some sort of Velcro or clamp solution to hold your batteries to the stand.

According to the manufacturer, the YN128 has a television lighting consistency index (TLCI) and colour rendering index (CRI) both over 95. These specifications are pretty much the best you can get; almost too good to be true, even, at this price point.

I don’t have a way to measure TLCI myself to verify the spec, but can say that in general usage there was no noticeable green or magenta colour cast and the quality of light from the Yongnuo YN160 is rather pleasing to the eye. There is no flickering at any power or colour level, and the light is completely silent with no cooling fan — nor does it get warm to the touch.

The lamp—which draws 7.6 watts and puts out a claimed 1024 lumens—isn’t dazzling, even in the dark, which is partly due to its large size but a double-edged sword: is the YN128 really bright enough? It isn’t nearly as bright as other compact light panels, such as the Metz Mecalight L1000 that I have been testing alongside it. I also tried to use the YN128 as a fill light when using a large Nanguang CN-30FC fresnel light as main light through a softbox. Unless you turn the power of the main light all the way down (and bring up your camera settings to compensate), the light from the ring LED is so dim by comparison that it barely registers.

I have found it tricky to work out when I am adjusting colour and when I am adjusting brightness, without a bit of trial and error every time, turning the lamp all the way up and down. This really affects usability. With no indicator or screen to read off power and colour level, you cannot really use this in a reproducible way without an external colour or light meter, or just using the light as maximum power and the coolest or warmest colour setting.

It may surprise many readers to learn that I am not actually a beauty blogger. However I reckon I can play devil’s advocate on this one. In a dark room, the YN128 can provide ‘that ring light look’ but it looks best combined with another panel for less of a Blair Witch kind of effect.

Combined with the Metz Mecalight L1000 LED panel (or equivalent small battery LED lamp) held/mounted off to the side, you can get some decent modelling while the YN128 fills in the shadows without creating new ones.

Another slightly unorthodox use-case I found for the Yongnuo YN128 was as a self-service photobooth light. Party-goers bring their own phones and put them in the clamp and take nicely-lit self-portraits. The main light is provided by the Nanguang CN-30FC through a Glow Hexapop softbox, above, with the ring light as fill and as a mounting point for people’s phones.

Even if you’re not some kind of beauty blogger, the Yongnuo YN128 is a nice and portable soft light source for general video use. It’s sort of like a softbox with a hole in the middle, but all that means is that it’s lighter than the equivalent disc-shaped LED panel, and not quite as bright, while still softening up the shadows.

That said, you might struggle to use it as your only light source unless you always shoot in dark spaces; especially with the bi-colour functionality you are best served balancing it with other light sources or using it as a fill light with ambient conditions.

But at $52 on eBay, the YN128 is cheap enough to be a fun toy and small and light enough not to take up too much space if you end up not using it all of the time. It isn’t bright enough as a main light but for non-critical applications such as mobile snaps and videos, it is pretty handy, while doubling as a phone holder.

Buy the Yongnuo YN128 now at the manufacturer’s official eBay store, or visit their web site for further information.

Got questions or feedback? Let me know in the comments below.