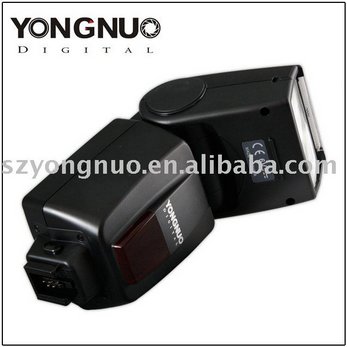 Shenzhen, China: Photographic lighting accessory manufacturer Yongnuo have revealed a new version of their classic YN460 manual flash, featuring an iIso hotshoe for Sony/Minolta users. Previously, every flash in the YN-46X and YN-56X series has only been available in the standard Iso mount.

For off-camera use, Yongnuo say they have no plans for a Sony version of their popular 2.4GHz RF-602 wireless triggering system. Transmitters (but not receivers) of the YongnuoÂ CTR-301P and PT-04TM come in iIso editions. Complete Sony-compatible triggering systems are available as the Hahnel Combi TF, Pixel Pawn and Pixel Soldier.

The Sony version Yongnuo YN460 will be available from the official Yongnuo eBay store and other sellers. Check listings carefully, as some listings for “YN460 for Sony” may just be the classic version and an adapter.