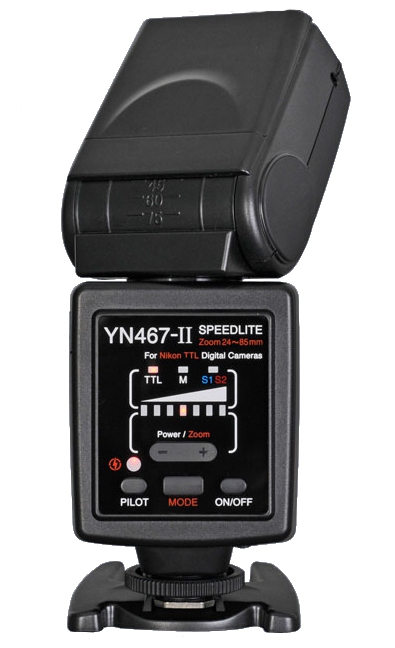 Looking for a budget external flashgun that you can control in both manual and TTL modes? Yongnuo, the Shenzhen-based photo accessory manufacturer, have updated their YN467 speedlight with a refreshed model, the YN467-II. It is a basic unit without all the bells and whistles of the more expensive YN-565EX or YN468Â flashes.

The latest version has the same basic features as the original but a better user interface. The power control is now digital instead of analogue, making it easier to adjust the flash intensity precisely. The buttons have also been revamped in response to customer feedback and should now be more reliable.Â As before, the speedlight has Nikon i-TTL and can also be manually controlled down to 1/64 of full power. There are two optical slave modes.

Additional features include a Prontor/Compur sync socket and the ability to control the zoom setting manually. In the first YN467, zoom could only be set on-camera by recognising the focal length of your lens.

TheÂ YN467 Mark II costs about the same as the YN467 – around US$80 on eBay, so it seems a no-brainer to get the newer one where it is available.