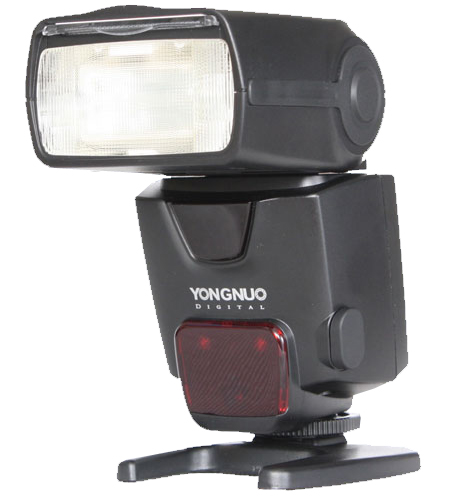 Chinese manufacturer Yongnuo has announced a new compact flashgun which works in E-TTL mode, but only off-camera. The Speedlite YN510EX has an optical sensor capable of receiving signals from Canon and Nikon’s advanced wireless lighting systems. There is one universal model which works with both brands, so you don’t need to worry about buying a new flash if you change cameras.

However the hotshoe connector is a “single contact” foot, so if you mount the Yongnuo YN510EX in a camera hotshoe it’ll only work in manual mode. This also means it won’t work with advanced radio receivers such as the YN-622, except for basic manual triggering. It is effectively a flash with the features of the more powerful Speedlite YN560EX squeezed into a smaller form factor. You could also think of it as a YN500EX with dumbed-down electrical connections.

A manual flashgun with wireless TTL, if that makes sense.

Who’d want this? Presumably somebody who likes the idea of a YN500EX but would like to save a few dollars by sacrificing the ability to use it in TTL mode on a camera. It’s not clear whether Yongnuo actually saves money by stripping this feature out, or are merely attempting to fill every potential niche in the market by providing a device with every possible combination of capabilities.

The YN510EX does have an improved user interface compared to the YN500EX, so if you only plan to use one of these flashes off-camera then it seems like a sensible choice. But pricing hasn’t been announced. When it has, it’ll become more apparent where it is meant to sit in the marketplace. For now, you can check Yongnuo’s official eBay store to see if it is available.

For more technical information, please visit the manufacturer’s product page.Â Would you buy one?