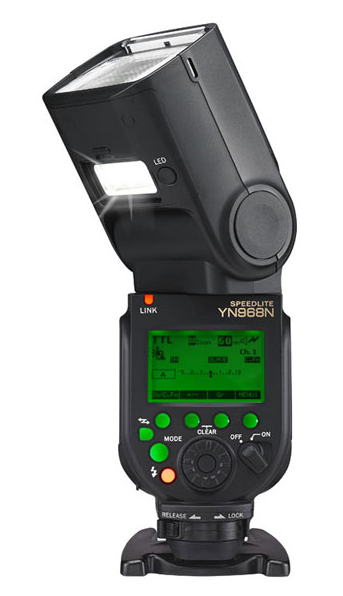 Yongnuo, the Chinese photographic accessory manufacturer, has revealed two new shoe-mount flashguns. The Yongnuo Speedlite YN968N is a long-awaited Nikon version of the YN968EX-RT, the company’s first flash unit with an integrated LED modelling lamp. The YN568EX III is an upgrade to the YN568EX-series of mid-range TTL Speedlites (which include a Pentax version).

What’s new in the YN568EX III? The design of the flash unit is the same as the YN568EX II, with a similar user interface. The specified light output (GN 58) is the unchanged but the recycling time is faster: now 2 seconds rather than 3 at full power. A USB port has been added to allow firmware updates.

Like other flashes in the series, the YN568EX III supports both Nikon and Canon’s optical wireless transmission systems and has an E-TTL hotshoe foot. Master mode is available, so you can use the YN568EX III as an optical master unit to control Yongnuo or Canon EX-series flashes (except the Yongnuo YN565EX) on 4 channels.

There is also a basic optical slave function, but there are no radio capabilities built-in.

How about the new YN968N? It’s almost exactly like the YN968EX-RT, but has a Nikon i-TTL hotshoe foot and works as a radio master or slave for the YN622N 2.4GHz i-TTL radio system. As a commander, it can control other YN968N and YN685N flashes and YN622N (II) transceivers. As a slave, it supports radio TTL signals from other YN968N flashes and YN622N (II) and YN622N-TX transmitters. You can also control it in manual or stroboscopic modes using YN560-TX (II), RF-603 (II) or RF-605 radio triggers.

The LED lamp is underneath the flash head and has a removable colour-correction filter for balancing with tungsten lighting.

The company has also published a drop test, showing how the YN968EX-RT (the Canon version of the YN968N) can survive a fall from a light stand.

The Yongnuo YN968N is available now for $119 from Amazon, eBay, B&H Photo and other sellers. Pricing and availability for the YN568EX III have not yet been announced.